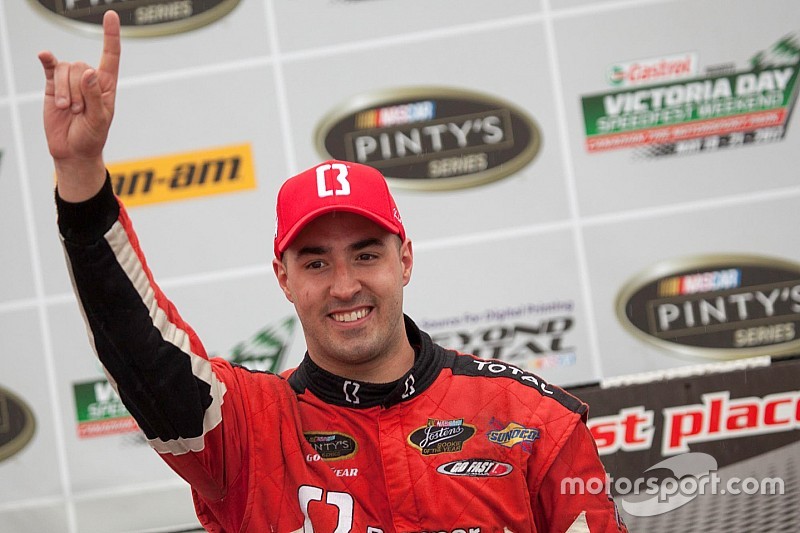 Kevin Lacroix’s game plan for Autodrome Saint-Eustache is simple: pick up his first win at his home track and gain on points leader Alex Labbe in the process.

Last weekend at Canadian Tire Motorsport Park Kevin Lacroix did everything he could to move closer to Alex Labbe as the Quebec natives continue their battle to win the 2017 NASCAR Pinty’s Series championship.

Lacroix picked up his fourth series win of the season joining Labbe as the only driver to win four times in 2017. The Saint-Eustache native also tied Andrew Ranger’s series record with his third consecutive win at Canadian Tire Motorsport Park. He was able to shave 10 points off of Labbe’s lead in the standings and now sits 26 points behind in second place with two events remaining on the 2017 schedule.

Lacroix would be just 16 points out of the lead if not for a 10-point penalty from NASCAR following a post-race incident at Riverside International Speedway two weeks ago.

Labbe has three starts in the Lucas Oil 250 at Autodrome St-Eustache. He qualified on the pole twice and added one top-five finish to his resume. Lacroix has two starts at the track with his best finish to date 11th last year.

Defending series champion Cayden Lapcevich still has a shot to become the first repeat champion in the 11-year history of the series. He stands 48 points behind Labbe.

The NASCAR Next driver will need to score a win and hope Labbe and Lacroix both have problems during the race. Lapcevich is also the defending winner of this event.

Lapcevich, Kennington and Andrew Ranger are the only drivers entered in the race who have recorded wins at the challenging short track located not far from Montreal, Quebec.

In addition to Lapcevich’s win last year during his championship season, Ranger won there in 2015 with Kennington picking up his win in 2010.

If the past two Lucas Oil 250 races at ASE is any indication, fans can expect this Saturday’s race to last beyond the advertised 250 laps. Last year Lapcevich held off Kennington in a green-white-checkered finish that went 3 more laps while in 2015, Ranger held off Mark Dilley in a race that lasted six extra circuits.

Adam Martin’s consistent season while competing for rookie of the year has paid off with the youngster clinching the 2017 NPS rookie title. The Ayr, Ontario driver leads Donald Theetge in the rookie standings 91-57 with just two races remaining and has built a lead that can’t be topped over the final two races of the season. Martin, who finished fourth at St. Eustache in his first start last season, is the only rookie contender to start all 11 races this season with four top-10 finishes.