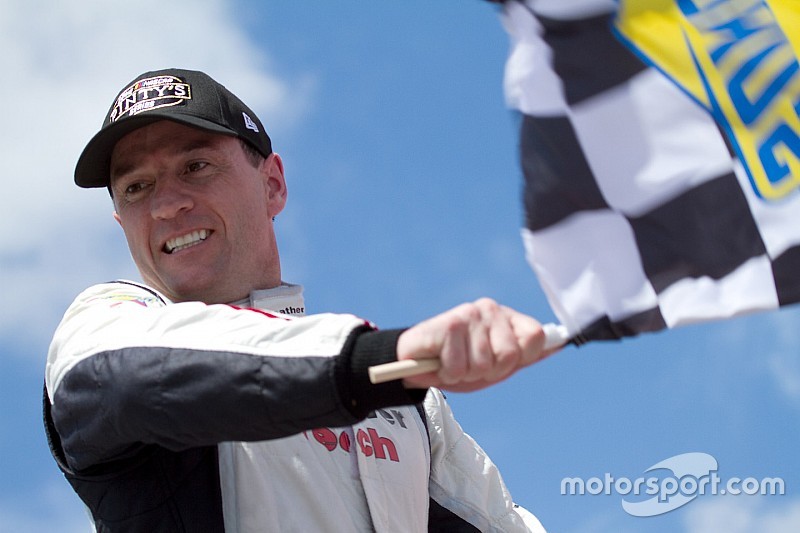 If L.P. Dumoulin wins his second NASCAR Pinty’s Series championship this season, he’ll probably look back at the LUXXOR 300 at Edmonton International Raceway as a key moment in his quest for the title.

Dumoulin’s No.47 Weathertech Canada/Bellemare Dodge was in perfect position on the restart on Lap 280 to finally get close enough to pounce on race leader Kevin Lacroix.

Lacroix was attacked from both sides from both Dumoulin and Alex Tagliani on the restart and once the dust settled it was the 39-year-old driver from Trois-Rivières, Québec taking home his sixth career win in the LUXXUR 300 presented by Bayer Saturday at Edmonton International Raceway.

Dumoulin becomes the fifth different winner at EIR in as many series races and joins Andrew Ranger as the only repeat winner so far this season. He also retakes the points lead with his sixth career series win.

Lacroix started the race from the pole and was hoping to end a streak of tough luck recently and was clearly the best car in the field early in the 300-lap race.

He was so strong he had lapped all but five cars in the field before the final caution of the race was given to the field when Adam Martin spun on Lap 268.

On the restart Tagliani was able to get past Lacroix and take the lead on Lap 281 and Dumoulin then made his move down low to make the pass on Lap 283 and stay out front the rest of the way.

“It [the race] was just epic,” said Dumoulin. “Kevin Lacroix was really fast and at one point we got close to him and then we had the yellow and that really helped us.

“We bumped and rubbed fenders and I got to the inside and we were able to get the lead. I’m so proud of my team and everybody on the WeatherTech team did a great job.”

Lacroix led from the drop of the green flag until he was passed by Tagliani on the restart on Lap 282. Lacroix battled hard until the very end, but would settle for second coming home .762 seconds behind Dumoulin.

Tagliani ultimately settled for third place and scored his fourth podium finish of 2018.

Cole Powell, who celebrated his first career win on Wednesday in Saskatoon, finished fourth and DJ Kennington fifth - the last car on the lead lap.

The NASCAR Pinty’s Series will be back in action Sunday, August 12th during the visit the historic Grand Prix de Trois-Rivières for Les 50 Tours Can-Am.