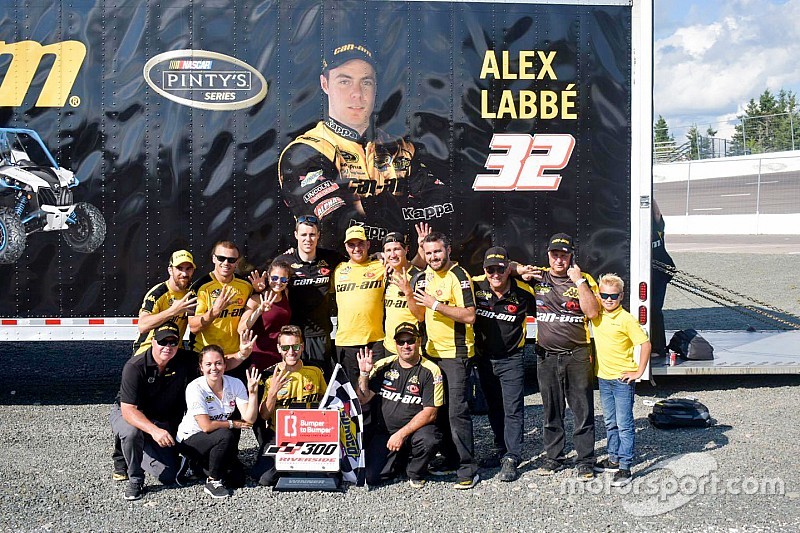 Alex Labbe can celebrate the 2017 NASCAR Pinty’s Series championship as soon as he takes the green flag, but he also wants to win the return event at Jukasa Motor Speedway.

Something Alex Labbe has dreamed about since he was a young kid racing in Québec will become a reality shortly after 7:30 on Saturday night at Jukasa Motor Speedway.

Labbe, from Victoriaville, Québec will become the sixth champion in the history of the NASCAR Pinty’s Series as soon as he takes the green flag in the Pinty’s Fall Brawl 200 in the series’ return to Jukasa Motor Speedway for the season finale.

Labbe enters the race with a 33-point lead over Kevin Lacroix and will secure the championship no matter where he finishes in the race.

“We didn’t want to talk too much about the championship until we knew we had it clinched and while we still need to start the race on Saturday, we feel really good that we’ll be able to celebrate after the race on Saturday,” said Labbe. “I can’t thank my team enough for all of their hard work all season long.”

While Labbe has the title secured after starts the race, second-place competitor Kevin Lacroix will be busy holding off defending series champion Cayden Lapcevich and D.J. Kennington in contention for the runner-up position in the final standings.

Lapcevich, who won the title when he was only 16 years old and is now part of the NASCAR Next program, sits 23 points behind Lacroix with Kennington, a two-time Pinty’s Series champion, just four points behind Lapcevich.

While Labbe and Lacroix have dominated the wins this season with Labbe visiting Victory Lane five times and Lacroix four giving the duo nine of the previous 12 races on the 2017 schedule, several drivers also want to celebrate a win this season.

Kennington, the only driver to start all 133 races in the history of the Pinty’s Series, last won 50 races ago in 2013, while Dumoulin last visited Victory Lane 39 events ago during his championship season in 2014 and Ranger last won in 2016, 19 starts ago.

This is also the first Pinty’s Series race at the newly updated and reconfigured Jukasa Motor Speedway, formerly known at Cayuga Speedway. The speedway hosted the series during its inaugural season in 2007 and has previously hosted four races between 2007 and 2008.

They're heading South: NASCAR Pinty's Series to race in US next year