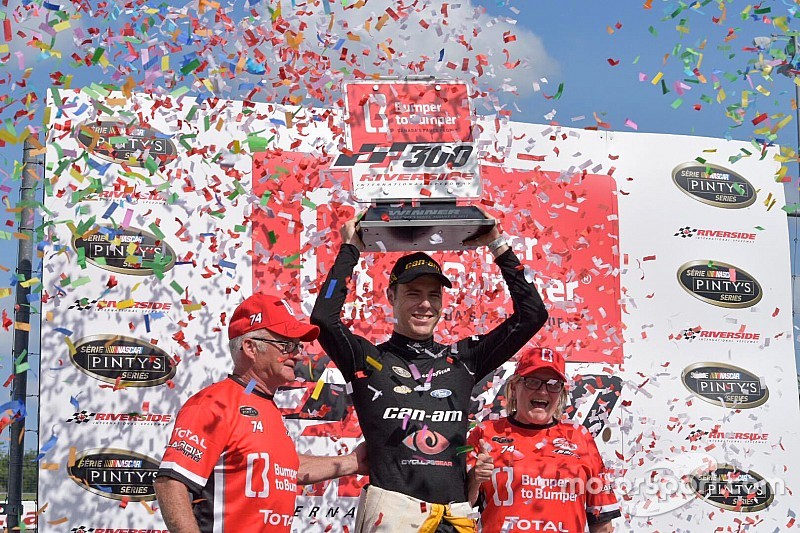 Alex Labbe scores fourth NASCAR win of the season after nudging Kevin Lacroix for the lead in Turn 4 of final lap and Lacroix immediately retaliates.

For years the NASCAR Pinty’s Series has been one of the most competitive that is sanctioned by the organization and Sunday’s finish at Riverside International Speedway lived up to its reputation.

Points leader Alex Labbe used his bumper to slightly nudge Kevin Lacroix in Turn 4 on the final lap and slip underneath and win the Bumper to Bumper 300 Sunday afternoon for his fourth win of the season.

Lacroix responded immediately after crossing the finish line by making hard contact with Labbe as they slowed down on the backstretch.

“I watched him (Lacroix) overcharge corner pretty hard and he got a little loose and was able to get close and eventually get underneath him,” said Labbe. “I dove in there and was able to make the pass and get the win.”

“It is a shame that in NASCAR everything seems allowed in the last lap,” Lacroix stated. “I am disappointed by the situation because it is the same thing that happened at the Grand Prix de Trois-Rivières.”

Lacroix clearly had the best car for most of the event leading 251 of the 300 laps and going for his first oval-track win.

Labbe closed in to take the lead on 274 before Lacroix got back in front and led until their last-lap incident.

D.J. Kennington, who was fastest in practice, started on the pole after qualifying was rained out on Saturday and led the first 36 laps of the race. He followed Lacroix in third for his fourth podium finish of the season.

The race was slowed seven times by caution for 45 laps with two red flags given to the field in the race.

With his fourth win of the season, Labbe was able to add three points to his lead in the NASCAR Pinty’s Series championship standings and now leads Lacroix by 26 points with three races remaining on the schedule.

The next race on the schedule will be the Total Quartz 200 during the second visit this season for the Pinty’s Series at Canadian Tire Motorsport Park on Sept. 3.

Lacroix will try and become the first driver in series history to win three consecutive series race at the historic facility located in Bowmanville, Ontario.

End of season of the Canadian pro racing series