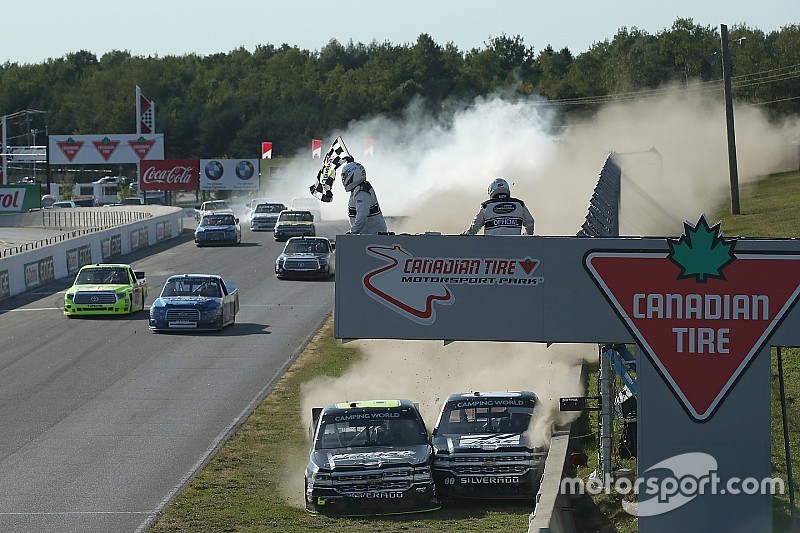 This will undoubtedly be the biggest and busiest event of the season at CTMP, with the roar of the NASCAR trucks and their close-contact, fender-rubbing race action as the main attraction.

Christopher Bell, Johnny Sauter and Matt Crafton, the three top competitors on the points' table will be battling fiercely for victory on Sunday afternoon. Canada native Gary Klutt will make his second NASCAR Truck series' start at CTMP, driving the No. 49 Silverado for Premium Motorsports.

The Labour Day weekend event also features action from the Canadian-based NASCAR Pinty’s Series with the presentation of the Total Quartz 200, a 51-lap, 200km long race for the best Canadian NASCAR drivers. Fans will also get to see races from the Ultra 94 Porsche GT3 Cup Challenge Canada by Yokohama, the Canadian Touring Car Championship and the Nissan Micra Cup.

Expect to see some exciting battles

Alex Labbe and Kevin Lacroix will resume their ferocious battle for this year’s title in the NASCAR Pinty’s Series. The two racers shouldn’t be invited to the same dinner after the bumping and pushing that’s been going on between them in the last few races. In the Porsche GT3 Cup, Scott Hargrove and Zacharie Robichon will continue their battle for supremacy. Same thing in the Nissan Micra Cup with Olivier Bédard and Xavier Coupal who will continue their fight for the 2017 title. Finally in CTCC, Chris Sahakian (Ford Mustang) and Bob Attrell (Hyundai Genesis Coupe) will battle it out in the GT Sport class.

Action in the paddock too

Family-friendly off-track activities include music in the Canadian Tire Action Zone and CTMP Marketplace as well as fire works on Saturday night is scheduled. Access to paddock areas and off-track action is included with the purchase of an event ticket and fans are encouraged to attend the autograph sessions and to bring their cameras to take photos of their favourite drivers.

“Canadian Tire Motorsport Park is again excited to welcome back the NASCAR Camping World Truck Series for the Chevrolet Silverado 250,” said Myles Brandt, President and General Manager, CTMP. “If the last four years are any indication, this race will again be epic. The weekend is additionally significant because it features the only international race for the Truck Series, as well as it being their only road course event of the season.”

Action starts on Friday morning with practice and qualifying sessions for most series.

Timetable of the 2017 Chevrolet Silverado 250 at CTMP