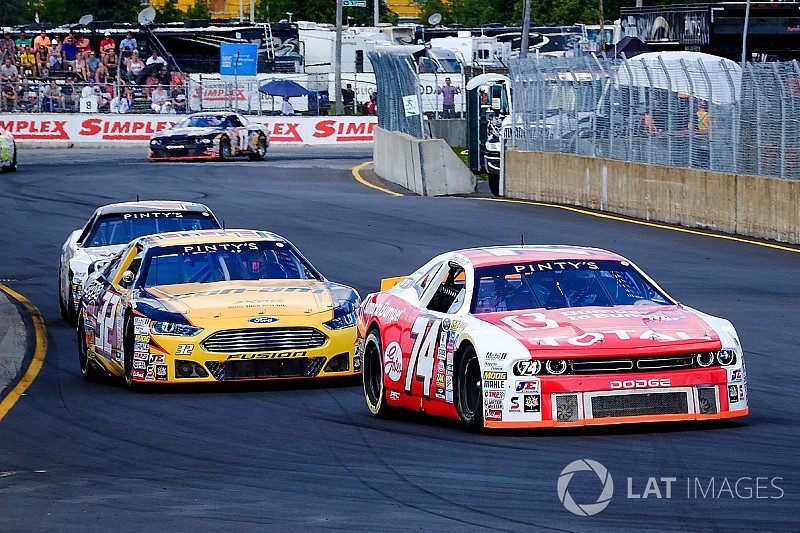 With just three races to stage, the battle for supremacy in the NASCAR Pinty’s Series, Canadian’s national NASCAR series, is heating up as the competitors get ready for this weekend’s race at CTMP.

Canadian Tire Motorsport Park’s roller coasting road course will be the stage of the 11th round of the 2017 NASCAR Pinty’s Series. The cars will go around the 2.459-mile circuit 51 times, for a total distance of 125.4 miles or 201.8km.

The Total Quartz 200 At Canadian Tire Motorsport Park will undoubtedly be very exciting with the top three drivers in the points standings involved in a close fight to the title.

The driver of the No. 32 Cam-Am/Kappa/Cyclops Gear/Lou’s BBQ Ford, Alex Labbe, leads the point’s standings and has already scored four wins this season. He’s still looking for his first series road course win and will try to keep rival Kevin Lacroix in second in the standings. Labbe leads Lacroix by 36 points in the standings, 432 to 396. Cayden Lapcevich is third with 388 points.

Kevin Lacroix, the driver of the No. 74 Bumper To Bumper/Total/Go Fast Dodge, has won the last two series races at CTMP and will try and tie Andrew Ranger’s record of three consecutive series wins at one track if he can sweep both events at CTMP this season.

Defending series champion Cayden Lapcevich, in the No. 76 Fastline Motorsports Dodge, is also looking for his first road course win and enters this race third in the standings 44 points out of the lead. Meanwhile, D.J. Kennington and Jason Hathaway are the only two drivers to start all 15 previous races at CTMP with each scoring a win.

Other drivers to watch for include Gary Klutt who is competing part-time this season and has one win, two top-five and six top-10 finishes in eight series starts at CTMP, and Adam Andretti who is set to make his second series start and first at CTMP. He finished third at the Pinty’s Grand Prix in Toronto in July.

Tension in the air

Don’t be mistaken: there’s no love affaire between Labbe and Lacroix.

Lacroix used some muscle to make the pass in NASCAR overtime to score his second win of the season and second at Circuit ICAR in July. Just weeks later on the streets of Trois-Rivières, Labbe bumped Lacroix to make a pass on him. Recently, Labbe bumped Lacroix on the final lap to make the pass in Turn 4 and pick up his fourth win of the season in the Bumper To Bumper 300 at Riverside International Speedway. There will be tension in the air, as the two arch rivals will fight fiercely for track position and maybe victory at CTMP.

Qualifying will be held Saturday afternoon between 4:40 pm and 5:25 pm as the field will be split into two groups. The Total Quartz 200 At Canadian Tire Motorsport Park will go green at 11:05 am on Sunday morning.