Huntersville, N.C. (October 16, 2002) -- On Friday, October 11, in Nashville, TN, CITGO unveiled the 2003 paint scheme for the No. 99 CITGO Ford Taurus.  Driver Jeff Burton was unable to attend due to his on-track duties at Lowe's Motor Speedway.  However, car owner Jack Roush was in attendance to help CITGO's Senior Vice President of Supply and Marketing, W.A. DeVore, unveil the car to over 2,000 people. 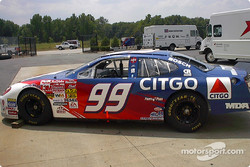 Presentation of the 2003 No. 99 CITGO Ford Taurus.
Photo by Roush Racing.
CITGO's light oil, lubricant, asphalt and international customers watched as fireworks exploded and a countdown led up to the unveiling.  As the cover was removed the crowd cheered and guests received a special limited edition 1:64 replica die cast of the 2003 No. 99 CITGO Ford Taurus.

"It was an exciting event," said Roush.  "I'm glad I was able to be a part of CITGO's presentation of the 2003 car.  It's a great paint scheme and we are looking forward to another successful year with CITGO and the No. 99 CITGO Racing team."

Burton was unable to attend the meeting as the racecars were on track in Charlotte at Lowe's Motor Speedway.  He did however send along a videotape that guests of CITGO were able to watch.  He was also able to view the paint scheme on the showcar before it left for Nashville.

"I wish I could have been there," said Burton.  "The 2003 paint scheme looks great and the entire CITGO team is excited to move into 2003 with CITGO and build on our success.  I really like the new stripes on the car, it gives it an edginess while maintaining the CITGO brand and a car that our fans recognize."

Roush Racing is the largest motor sports team in the world with eight teams in NASCAR's three major series: Mark Martin, Jeff Burton, Kurt Busch and Matt Kenseth (based in Concord, N.C.) in the Winston Cup Series; Greg Biffle and Burton in the Busch Series (based in Mooresville, N.C.); and Jon Wood (based in Livonia, M.I.) in the Craftsman Truck Series.

Truex: NASCAR Next Gen car "does everything a little bit better"