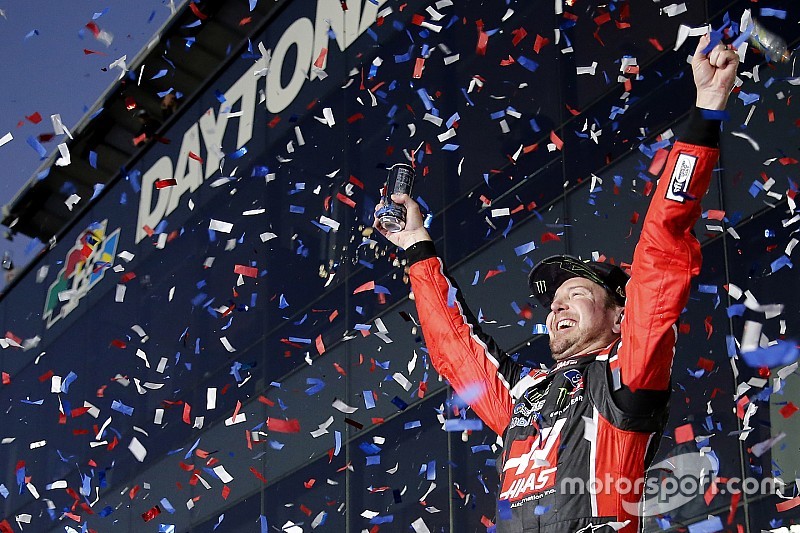 After winning the Daytona 500, Kurt Busch made one phone call — to his parents.

The sacrifices Tom and Gaye Busch have made have produced not one, but two NASCAR Cup champions — a feat equaled in the sport only by the Labonte family.

Traditionally, the Buschs would be with their sons for Daytona Speedweeks. But on Sunday, they were home in North Carolina, where Tom Busch was recovering from back surgery. Surrounded by friends at their own Daytona 500 party, Gaye Busch could not hold back her emotions as she watched the black No. 41 Haas Automation Ford take the checkered flag.

“I just couldn’t believe it,” Gaye Busch told motorsport.com by phone. “For any driver, it’s such a goal to achieve. And when the last lap was coming, we were all standing up and cheering. Then the tears started flowing. I was so happy for him, so proud.

“It’s been a long time. We’ve all been waiting for this. He’s been the bridesmaid for so many years. He kept finishing second. It’s such an honor to accomplish this, and we’re just so thrilled for him.”

What Kurt said when he called his mother

Gaye didn’t want to bother her son during the post-race. She knew a text message would be lost among the notes from well-wishers. When Kurt called her around 11:30p.m., on the way to the post-race celebration at Razzles, he described the closing laps and compared the experience to the family’s humble racing beginnings back in Las Vegas.

“We laughed and I said, ‘That’s true.’ That’s how he started driving — with no rear view mirror. So it was just icing on the cake that he finished this way. I was so pumped up last night. I couldn’t sleep.”

Dealing with the dangers of plate racing

Busch, 38, understands his mother’s trepidation every time he and his brother Kyle climb in their race cars. That tension rises at restrictor-plate tracks, understandably following the younger Busch’s wreck at Daytona in 2015. He sustained a compound fracture to his right leg, broke his left foot and missed 11 races. On Sunday, Kyle Busch wrecked after 103 laps.

“For years, my mom has always had a displeasure for Daytona and Talladega because of the plate racing and that you’re a victim of circumstance a lot of times when somebody has an issue and it wipes out a bunch of cars,” Kurt Busch said.

“That nightmare came true with Kyle getting hurt here a couple of years ago. She just always thought that Daytona and Talladega were the toughest on her boys and she just wanted us to come home.

“So when I called her, I felt like I had just placed the sword in the stone. I said, “We conquered it! We conquered Daytona!’ She was crying, of course, and just so happy that I was safe and I can’t wait to see her.”

And Gaye Busch knows her son is in good hands. During the off-season, Kurt married Ashley Van Metre. Gaye Busch says her son has never been happier.

“She balances him out,” Busch said. “She knows how to settle him down. She is very calming. I’ve never see her get angry. She never says a bad word about anybody. She is the sweetest thing. I don’t know anyone else out there like that.

“You know how drivers are. They get all worked up. Their adrenaline is going. He’ll be having a bad day and come back to the motor coach and then he sees her. And it’s like flipping on a lightswitch. He automatically gets calm. It’s just so awesome to see. Their relationship is growing every day. And it makes us so happy to see that Kurt is finally happy. He’s put so much of the bad behind him.”

The winning of the Daytona 500 is a culmination of a banner year for Kurt Busch. The long-time Chicago Cubs fan watched his team win its first World Series since 1908. He married Van Metre on Jan. 7 in St. Barts. The following week, he held a reception for friends and family at the Breakers in Palm Beach with Aerosmith providing the entertainment.

While he started Daytona Speedweeks with a wreck 16 laps into the Clash, Busch ended NASCAR’s opener with the big prize — the Harley J. Earl trophy.

Eyes on the championship

Yes, Gaye Busch is biased but she hopes this is finally her son’s year. After witnessing the resolve of Kyle Busch’s return from injury to 2015 championship, her mother’s intuition is sensing another comeback for Kurt.

“For Kyle to accomplish what he did, it still brings chills to me,” Gaye Busch said of her younger son’s NASCAR Cup title. “No one could have ever written any of that. No one. I never expected him to even go back into the car until July. He said, ‘Oh no. I’m going to be there in May.’ I was like, ‘There’s no way.’ And for him to go out and win the championship, it was mind-blowing. Unbelievable. And now for Kurt to win the Daytona 500, I’m just speechless. What they’ve accomplished is so gratifying. I’m grateful. I’m honored. And I’m very blessed to have such two talented young men.

“Kurt really has the biggest heart. People don’t realize the big hearts NASCAR drivers have. Kurt, Kyle and all of his foundations, Jimmie Johnson, Tony Stewart. The perspective of the race fans, I don’t think they see that as much as they should because these guys really, really do help out a lot of people. I’m honored to see that with both of my boys.”

Analysis: Daytona 500 victory "makes it all worth it" for Tony Gibson