“A total team win” for Hamlin and Toyota 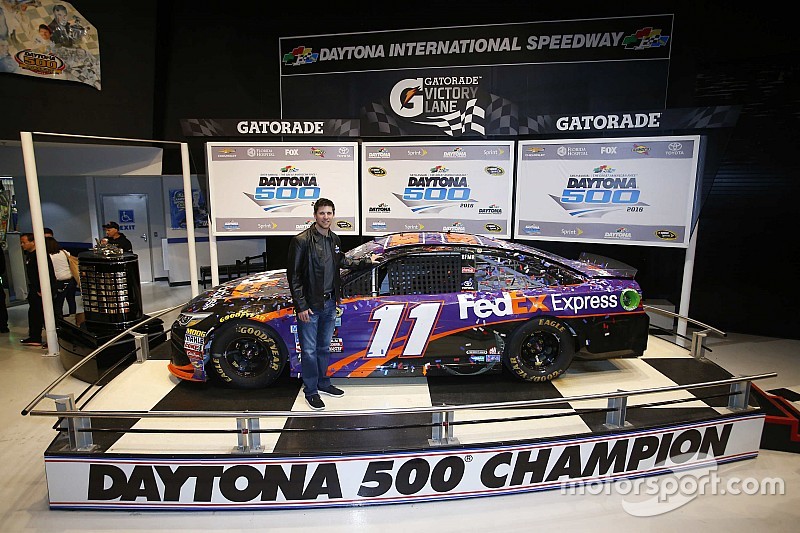 Denny Hamlin hadn’t had time to sleep on his Daytona 500 win when he arrived at the Champion’s Breakfast early Monday morning.

After his media responsibilities ended on Sunday, Hamlin had dinner with the No. 18 Joe Gibbs Racing team then partied into the wee hours of the morning at Razzle’s — a local nightclub.

But what stuck with Hamlin 14 hours after winning the Great American Race was the selflessness of his teammates in the closing laps.

“We all had a shot to win on the last lap,” Hamlin said. “That’s what we tried to do. That’s what the whole purpose of our plan was before the race even started was to give all of us a shot going into the last lap — and we all had a shot. That was the cool thing about what transpired during yesterday’s race.

“In the past, it’s been, ‘well, we don’t have this guy because he’s wrecked out,’ or one of my teammates or two of my teammates or us or I’ve wrecked out in all these races and it’s hurt us in the past for not winning the Daytona 500 but I think that the best display of teamwork I've ever seen for 500 miles and that’s what gave all four of us a chance to win.”

What was equally important to the Joe Gibbs Racing organization as a whole — as well as the future of Toyota Racing Development — was the ease in transitioning Furniture Row Racing and Martin Truex Jr. to the fold. As solid as the JGR contingent has been since expanding to a two-car operation with Bobby Labonte and Tony Stewart in 1999 then winning the company’s first title one year later, a decade had past since Gibbs won its last championship with Stewart in 2005.

Certainly, a lot has changed in 10 years with JGR moving from Chevy to Toyota and expanding from two to three teams in 2005 — and eventually four teams with Edwards last year. But what was missing was having another stable organization to bounce ideas off of particularly when competing against the eight-car juggernaut of Hendrick Motorsports and Stewart-Haas Racing. If there was any question whether Furniture Row Racing would be accepted into the Toyota Racing family, those doubts were erased at Daytona.

“We were trying to solidify our relationship with Truex and (his crew chief) Cole Pearn,” Hamlin said. “Yesterday, was a great example of solidifying that relationship. As drivers, we’re scared to invite someone else new into our information and things like that and I think they did a real good job of playing teammates at the right time and hopefully, that’s a relationship we can build on for the rest of the year.”

The advantage on Sunday was clear. And when the race ended on Sunday, crew chief Mike Wheeler told Hamlin over the radio to be sure and remember his teammates during his post-race comments.

Clearly, Hamlin understood the victory was not his alone. In the Can-Am Duels, where Hamlin was the lone JGR Toyota, it became apparent that, without help, it would be impossible to win. He finished fifth.

The next day in second practice, all five Toyota lined up and drafted for 15 laps. Together, the slowest Camry was 0.477-seconds faster that the Team Penske trio of Fords led by Ryan Blaney, Brad Keselowski and defending Daytona 500 winner Joey Logano.

“It was teamwork,” Hamlin said. “The biggest key was we saw how fast our cars could go when we all just worked together and stayed together and not worried about what the outside line was doing. Just stay in a line and see what kind of speed we can run and we saw our cars were fast. At that point, we knew if we just ran the bottom, stayed in line, essentially, with the speeds we were running it almost made it impossible for the outside line to make a move on us.

“With the lack of the side-by-side, once we got to the front we then executed our strategy. We all had a shot on the last lap. That’s what it’s about is figuring what you need to do to win the race.”

For now, Hamlin is trying to figure out how to get a little shut eye before his media blitz in New York. His fellow 500 winners, Jeff Gordon, Jimmie Johnson and Dale Earnhardt Jr. offered the following advice.

“The schedule is kind of pain but live in the moment because you never know,” Hamlin said. “This is a huge accomplishment. This will be with you forever so enjoy the week — and that’s definitely what I’m going to do.”