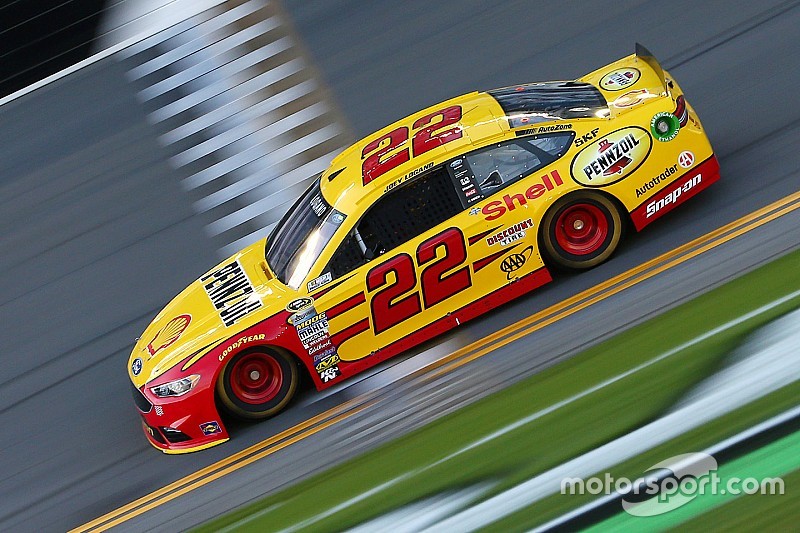 Joey Logano didn’t need a meeting with NASCAR at Homestead-Miami Speedway in November to realize the best place to leave his feud with Matt Kenseth was in the rearview mirror.

The driver of the No. 22 Shell/Pennzoil Ford was on course to match his career-high finish in the standings in last year’s Chase for the Sprint Cup — if not surpass it.

I feel like we're doing a really good job. We've lost them in a different way every time

“As a competitor, as an athlete, you take something from every year and you learn from it,” Logano said. “There’s a lot of situations you can learn from every year. You take what you can and you apply it to become better.

“And I look forward to the opportunity to become better this year.”

As a new season approaches, the 25-year-old racer knows his best strategy is to move forward. Logano, the defending winner of the Daytona 500, has done just that during Speedweeks. He finished second to former teammate Denny Hamlin in the Sprint Unlimited.

In his Can-Am Duel on Thursday, Logano was runner-up to Dale Earnhardt Jr. — Sunday’s favorite to win a third 500. On Saturday, it was a different No. 88 Chevy Logano finished second to, Earnhardt’s JR Motorsports entry fielded by Daytona 500 polesitter Chase Elliott.

On Sunday, Logano hopes to improve on his earlier results.

“I feel like we're doing a really good job,” Logano said. “We've lost them in a different way every time. But these last two have probably been the closest.

“I feel like I'm getting closer. Got close to Junior in the Duel. This time I got close to the 88 (Elliott). Different driver, same number. Hopefully, (Sunday) I can get in front of it by the start/finish line. That would be really cool.”

Since joining Team Penske in 2013, Logano’s statistics have improved significantly each season. After Logano’s first year, he posted one victory, two poles and an average finish of 14.1. Despite advancing to the Championship Round last year as he did in 2014, Logano’s six wins and six poles were a series’ best. Only Kevin Harvick earned more top fives and led more laps than the No. 22 Team Penske squad.

Unless Logano stays the course and remains focussed, it will be difficult to continue raising the bar. But his progress has shown no signs of slowing despite the obstacles in his way.

“As a driver, you keep your goals in mind,” Logano said. “My goal, as a race car driver, is to win every race I’m in. That’s what I keep as priority number one. To do that, obviously, you have to think of some things that are out of the box and these situations do appear every now and again.

“Each person has their own way of handling it and every situation requires something different, in my opinion. I’m sure this will — over time — go away and we’ll be able to focus on what we get paid to do. We’re plenty motivated.”

Roger Penske has been impressed by both of his drivers, Logano and 2012 Cup champ Brad Keselowski. The pair has combined for 20 victories since Logano joined the fold in 2013 and has provided Ford with its best opportunities to win the title.

After 50 years in racing, Penske has experienced a variety of rivalries. He  described Logano’s altercation with Kenseth last season as “water under the bridge.”

“It’s just like in business, you have a bad quarter, a bad year, you just move on,” Penske said. “You have to get better. I think Joey handled it like a professional. We tried to do the same as a team. For us to get in a fight or a word fight about what we thought was right or wrong. There was lots of noise about it. I think our best position was to think about the next race and go onto 2016.

“Joey won more races than any other driver in the last two years. He’s a quality guy individually and personally and I think you’re going to see a lot more from him. Certainly, teaming up with Brad, I think we’re going to have a strong two-car team this year.”

While winning on the Captain’s 79th birthday would have been a nice bonus on Saturday, the focus for Team Penske is certainly on a third Harley J. Earl trophy — and the big prize — a second Sprint Cup title.

“We want to win trophies for Roger and win a championship,” Logano said. “Anything less than that we don’t consider it success. I am proud of what our team has done the last three years I have been at Team Penske and being able to improve each year. The first year we won one race, then five races and now six races.

“It gets harder as you keep going but we have to keep going. That is what keeps us driven. Todd Gordon is a great crew chief and we work really well together and keep building on that relationship. I think us sticking together and growing and doing the same things we have been doing but refining it to get better each and every area keeps the results coming that we have gotten and hopefully the big trophy at the end of the season.”

Darrell Waltrip: "Jeff has changed the dynamic of the FOX NASCAR booth a lot"