Moving On Up... Allgaier will compete fulltime in the NASCAR Sprint Cup Series (NSCS) this season for HScott Motorsports, with primary sponsorship for 21 races from BRANDT Professional Agriculture. BRANDT sponsored Allgaier at Turner Scott Motorsports for the previous three seasons in the NASCAR Nationwide Series (NNS). Allgaier made four NSCS starts last season in the No. 51 BRANDT Chevrolet SS at Chicagoland Speedway, Kansas Speedway, Talladega, Superspeedway and Phoenix International Raceway. 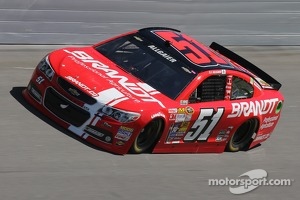 Budweiser Duels... After qualifying 30th in Sunday's qualifying session at Daytona International Speedway, Justin will compete in the second Budweiser Duel race on Thursday evening in an attempt to qualify for his first Daytona 500 in the No. 51 BRANDT Chevy. Television coverage for the Budweiser Duels begins at 7 p.m. EDT on FOX Sports1, and on MRN Radio beginning at 6 p.m.

Justin Allgaier on Daytona International Speedway: "Competing in the Sprint Cup Series is all I have ever dreamed of since I was a kid. I have to thank Harry Scott and everyone at BRANDT and HScott Motorsports for giving me this opportunity. It will be very important for me to focus on keeping the car clean in the duel race on Thursday. The duel race will also be an opportunity to draft with different cars in the race to try and make friends for the 500 on Sunday. Moving forward to Sunday, it will be a very special day. The Daytona 500 is such a historical event and very few people get the opportunity to race in it. My goal is just to keep the car clean and to be there at the end of the race. If you make it through all of the accidents, you have a great chance of winning it from anywhere in the field."

Crew Chief Steve Addington on Daytona International Speedway: "I'm excited to be at Daytona and ready for the season to start. I'm with a new team, and a young driver in Justin who has a lot of talent. We've had a couple of practice sessions and those have gone well. The guys at HScott Motorsports have prepared a great car, and Justin needs stay out of trouble in duel race and get a good finish to be locked in for the Daytona 500. Once Thursday night is over and we are locked in, we can kind of breathe a little bit, and try a few things in the practice sessions. Otherwise, he just needs to take the checkered flag in the 500 and have a solid finish."

About Competition Director and Crew Chief Steve Addington: Spartanburg, S.C. native Steve Addington joined HScott Motorsports in January 2014 as competition director and crew chief for the No. 51 BRANDT Chevrolet SS. Steve comes to the team from Stewart-Haas Racing, where he spent the past two seasons as crew chief on the No. 14 team and earned four wins with Tony Stewart. Addington also served as a Sprint Cup Series crew chief at Team Penske and Joe Gibbs Racing, racking up a total of 20 wins in the series. Addington began his career working on dirt cars and is a former Nationwide Series crew chief. Addington resides in China Grove, N.C. with his wife Katie and has three children.