Allgaier is making his debut at Texas

Justin Allgaier will be making his first NASCAR Sprint Cup Series (NSCS) start at Texas Motor Speedway (TMS) in the No. 51 BRANDT Professional Agriculture Chevy. This weekend will be Allgaier's second start this season on a 1.5-mile oval. His first 1.5-mile track this season was Las Vegas Motor Speedway where he finished 31st. Allgaier had mixed results in the NASCAR Nationwide Series (NNS) at TMS, scoring five top-10 finishes in 11 starts.

See Justin...Allgaier will appear at Racing for Faith, located in grandstand section 146, near gate seven, at 9:45 a.m. local time on Sunday, April 6 for a Q&A session. Also appearing are the Duck Commander's Phil and Alan Robertson along with Wendy Venturini.

Martinsville Recap...Allgaier made his first NSCS start at Martinsville Speedway on Sunday afternoon, one of the few tracks on the circuit that Allgaier has not raced on. Allgaier had a smooth practice and qualifying session on Friday afternoon at the 0.526-mile track. He qualified 25th for the STP 500, his best start this season. All track activity was cancelled on Saturday due to precipitation, but Allgaier completed all 500 laps on Sunday and finished in the 23rd position for HScott Motorsports. 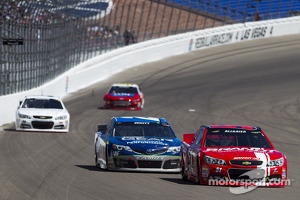 Justin Allgaier on Texas Motor Speedway: "I always look forward to racing at Texas [Motor Speedway]. It's a fast mile-and-a-half and puts on a good show for the fans. The track schedule is a little different this weekend with qualifying being last. That's good for a rookie like me because it gives me more time to practice before we have to qualify. The guys at HScott Motorsports have been making a lot of progress the last couple of weeks and I've been improving on the track, so I'm looking to continue that momentum this weekend."

Crew Chief Steve Addington on Texas Motor Speedway: "It's Justin's first time at Texas [Motor Speedway] in a Sprint Cup car, so all of the practice time he can get is crucial to starting the weekend off strong. I think we will have a smooth weekend and hopefully the rain stays away on Sunday."

About Competition Director and Crew Chief Steve Addington: Spartanburg, S.C. native Steve Addington joined HScott Motorsports in January 2014 as competition director and crew chief for the No. 51 BRANDT Chevrolet SS. Steve comes to the team from Stewart-Haas Racing, where he spent the past two seasons as crew chief on the No. 14 team and earned four wins with Tony Stewart. Addington also served as a Sprint Cup Series crew chief at Team Penske and Joe Gibbs Racing, racking up a total of 20 wins in the series. Addington began his career working on dirt cars and is a former Nationwide Series crew chief. Addington resides in China Grove, N.C. with his wife Katie and has three children.

Harvick eyes a win in Texas