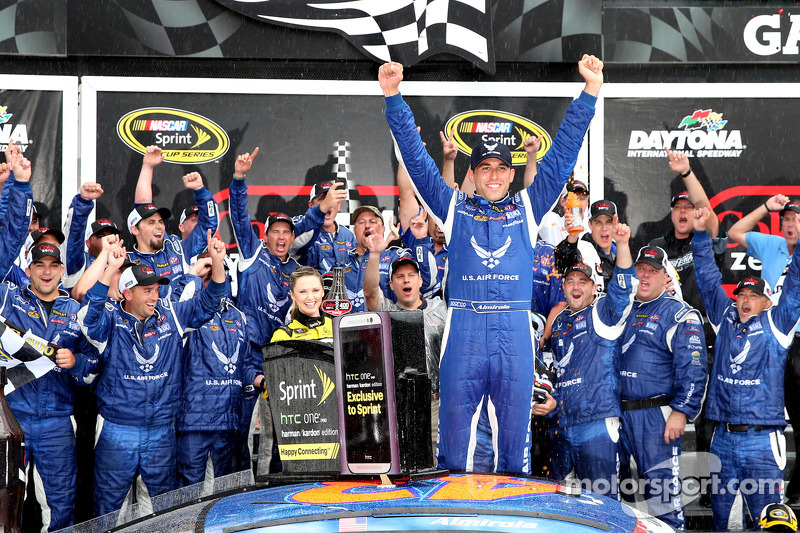 Richard Petty Motorsports Ford driver and Tampa native Aric Almirola was in the right place at the right time as NASCAR called the Coke Zero 400 for rain with 112 of 160 laps in the books. It’s Almirola’s first Sprint Cup win.

It was a strange race, where the proper name should have been the Air Titan 400, as NASCAR’s new track dryers spent as much time on the track in the past 18 hours as the cars.

But that didn’t matter to Almirola. He said he would rather have won under a green flag, but this one is sweet, anyway. “This is really, really special. I'll take them any way I can get them,” Almirola said. The number 43 has not won a race since 1999, and this victory comes 30 years after Petty won his 200th race with a victory at Daytona. It also means Almirola will likely have a spot in the NASCAR Chase for the Championship.

“I grew up two hours away from here in Tampa and I grew up in those stands watching Daytona 500s and Firecracker 400s and grew up dreaming about what it would be like to win here,” Almirola said. “ I can’t believe I just took the 43 car to victory lane here at Daytona. This is amazing.”

Brian Vickers in the Michael Walltrip Racing Toyota was second, Kurt Busch third, Casey Mears fourth and Austin Dillon was fifth in a diminished field where many of the usual front-runners were taken out in one of two major crashes.

Vickers, not surprisingly, was hoping the race would resume. "I think to a certain extent, as many fans that stuck around today to watch this race and to see 160 laps knowing it was only 1:30 or 2:00 in the afternoon -- I was shocked that it was going to be called this early in the day knowing that we have lights and when it was supposed to be a night race anyway. So, I don’t know. I just kind of felt like it was going to be another storm that would come and go and we’d go back green and finish the race, but it ended up not being that way.”

The race was scheduled for Saturday night, but rain began falling in the afternoon, and the race was postponed at 9 p.m. until 11 a.m. Sunday.

It was not easy for anyone, including fans. On the 20th lap, right before NASCAR was going to call a “competition caution” period, Ricky Stenhouse, Jr. spun, collecting a dozen cars, many of them top runners like Jimmie Johnson, Jeff Gordon, Dale Earnhardt Jr., Kevin Harvick, Matt Kenseth and Kyle Larson. Some cars tried to take refuge in the grass, only to find it a muddy field from all the rain that shredded front bumpers off and sent cars spinning out of control.

Tony Stewart, whose number 14 car was among the most damaged, said the No. 17 car (Stenhouse) “got sideways on the lap that we’re all getting a competition caution. I don’t know. I guess Ricky thought it paid something to get to lap 20. It didn’t make much sense to me, but I’m not that smart either, so I don’t know.” . “I don’t know what happened,” Johnson said “There were just cars spinning. I just feel so bad for my crew. They worked so hard to get a car ready to come down here and have a fast car. And then we make 15 laps four days later, or something like that? I’m certainly disappointed. I was kind of busy with my environment of three-wide and I just saw cars moving around and smoke in front of us. So I don’t know what triggered it or what happened. But I’m just thoroughly disappointed for everybody on the Lowe’s team. Those guys have been down here for four days in this heat, working on the car; not to mention all the time and effort put into this, to go 15 or 20 laps is just a really big bummer.”

“It looked like the No. 17 got squirrelly up there and then they all started wrecking,” Harvick said. “I had the wreck cleared but unfortunately with the splitters and everything out in front, the grass is what tears all the cars up. It was unfortunate for our Budweiser Chevy; but maybe one day they’ll make grass that’s not eight inches tall.”

That was the Big One 1. Big One 2 happened on lap 97 when Kasey Kahne, winner of the rain-delayed Nationwide race Friday night, got turned by Greg Biffle while running up in the top five while racing down the backstretch. Cars suddenly scattered in every direction, but there was nowhere to go.

During the massive pileup, Jamie McMurray was sent flying through the air with all four wheels coming off the ground. Kyle Busch flipped at the tail end of the wreck and sat in the car as crews pushed the No. 18 machine back on its wheels.

"When you have a car spin out at the front of the field, there is just nowhere to go. I ran into the guy who was directly in front of me and the guy behind me clobbered me," McMurray said.

Among those involved were Denny Hamlin, Joey Logano, Kasey Kahne, Clint Bowyer Jamie McMurray, Greg Biffle, Kyle Busch, Ryan Newman, and many others. As many as 26 cars were swept up in the mess, according to NASCAR.

"What a mess," said polesitter David Gilliland, who was caught up in the second incident. "I knew there was going to be trouble," Gillliland said, as some cars were on fresh tires, others weren't, as rain is threatening to end the race early. This crash caused the second red flag of the race -- the first was for a rain delay of 26 minutes.

“I was about sixth or so and I was getting hit from behind and I just started spinning. It’s kind of a tough spot to be in there because everybody is trying to get going and I just got hit, started going left to right and spun around. I knew it was going to be big as far up as I was,” Kahne said.

"Just close quarters racing," Biffle said. "A just a chain reaction." The pileup, which began on the back straight, ended with Kyle Busch upside-down. No injuries have been reported. “It just felt like a slow carnival ride," Busch said.

The race resumed on lap 104, but was quickly yellow-flagged, then stopped completely for rain on lap 113. Almirola was leading, and looking for advice on how to do a proper rain dance. "I'm not going to lie, I just wish the good lord would dump a big rain shower on us right now," Almirola said, of the chance of getting his first Cup win.

But the rain continued, and began falling harder, and weather radar was not promising. “Florida in the summertime is tough in the afternoon," said Danica Patrick, who was eighth.