Another new-winner on the horizon at Daytona? 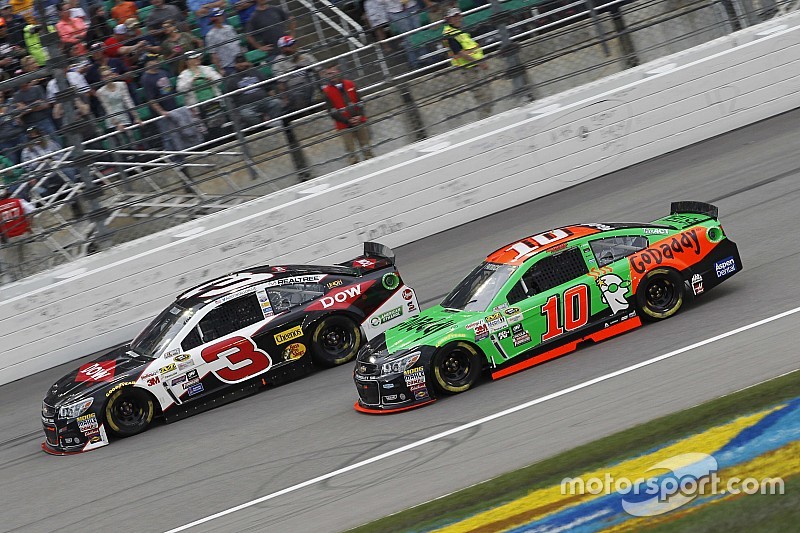 Who is most likely to earn their first Sprint Cup win at Daytona this weekend, following in the footsteps of Aric Almirola?

Daytona, like Talladega, has a habit of producing new and surprising winners through its hectic pack racing and unpredictable, incessant shifts in the running order throughout the entire race. It's an event where almost any driver can have a shot at victory if they survive the inevitable carnage and make the right moves when everyone is jostling for position in the sprint to the checkered flag.

Joey Logano won the Daytona 500 earlier this year, but in last year's 4th of July race, Aric Almirola was able to emerge victorious for the first time in his Sprint Cup career. It took the Richard Petty Motorsports driver 125 starts before securing his first win, launching him into the Chase.

He is the third first-time winner at Daytona in the last four years, joined by 2011 Daytona 500 champion Trevor Bayne and 2011 July race-victor David Ragan.

With the new Chase format, winning is paramount and for smaller teams and new drivers on the scene, there's no better place to make a name for yourself than at these hallowed racing grounds. With that being said, who is most likely to break through and rid themselves of the goose egg in their win column this weekend?

Unfortunately, the young driver was taken out of the 2015 Daytona 500 by an engine failure after placing sixth in his qualifying race, but is still a driver to watch in that Wood Brothers Ford, which won the 2011 Daytona 500 with Bayne at the wheel. Blaney impressed at Talladega a couple months back, running in contention for the win before finishing fourth.

Stenhouse hasn't put up head-turning statistics in his six Daytona starts, but he has proven to be a competent plate racer. He has never failed to finish and has one of the better average finishes of the drivers entered in this weekend's race.

The IndyCar-turned NASCAR star has enjoyed some of her best performances on place tracks, earning pole position for the 2013 Daytona 500. The high-intensity pack racing she experienced in IndyCar has paid dividends on the NASCAR side, but the chaotic end to these races seems to be her Achilles Heel. Let's forget what's under the hood of that No. 10 Chevrolet either - Hendrick power.

The Front Row Motorsports driver is one of the strongest underdogs in the field when NASCAR visits a plate track. He's led four of the 14 races he's started and nearly pushed Carl Edwards to the win in the 2011 Daytona 500, placing third himself. And with 14 starts, he's the most experienced non-winner in the field.

Austin Dillon, besides the fact that he has a No. 3 on his door, is expected to run well at Daytona. He won the pole for the 2014 Daytona 500 and all ECR-powered teams have shown strength at the plate tracks recently. Dillon's lone top five in his career thus far came in last year's July race and only Dale Earnhardt Jr. has a better average finish than him at Daytona.

Other drivers of note to watch include Landon Cassill, Brian Scott, and Sam Hornish Jr.