Ford Performance’s success in the Monster Energy NASCAR Cup Series this season was a long time coming and the manufacturer has no desire to slow down now. 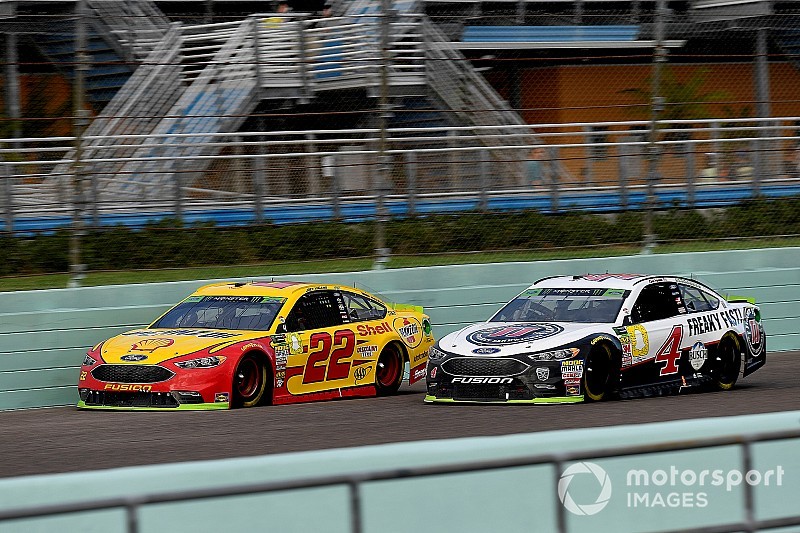 Obviously, Ford would like to continue its high-level performance but there are a couple of potential obstacles ahead in 2019 – Ford is transitioning to using the Mustang model in the Cup series and NASCAR has a new package of aero rules coming out next season.

We talked with Mark Rushbrook, global director of Ford Performance, about what lies ahead for the manufacturer in NASCAR next season during his recent visit to the Ford Performance technical center in Concord, N.C.

Ford Performance is coming off the highest of highs, so what’s the mood going into the 2019 season?

Rushbrook: I think excitement – throughout our company, in Dearborn (Mich.), the tech center and across our racing teams. To have in NASCAR and in Cup to have the season that we’ve had, there is excitement to carry that success into 2019. Yes, there is a new car with the Mustang and a new set of aero rules, the body package and the engines, but I think there is excitement surrounding the success and knowing we have good teams, good engineers, good drivers with whom we will compete.

Rushbrook: Both are critical. If we can’t do both, we won’t succeed. Since the date of the submission of the Mustang body, we’ve been hard at work to make sure we fully understand it and what it’s going to take to be successful on track and in between, the rules package was released and that kind of adjusted our course. The new rules package requires more than just the body and aero, it affects the engines. So, our mindset from a performance standpoint is we’ve got to nail everything.

It’s been a while since Ford has been able to celebrate a driver’s championship in the Cup series. What does that do for your operation as a whole considering how much of your motorsports emphasis is placed in NASCAR?

Rushbrook: It helps tremendously. First of all, in 2018 we had success not just in NASCAR Cup but in the GT program, in the WRC program and in Australia, it’s just builds our confidence about everything that we’ve been doing. It goes back four years when we made the decision to become more serious, more competitive and go win races and championships. It takes time to build all of your tools to be able to deliver. It really came together in 2018 across all the different series. It’s great feedback that we’re doing the right thing. We need to keep up that momentum, keep that attention and focus to detail. We can’t rest. This is racing, right? We just need to keep going.

Was it a big sigh of relief to finally be able to end the drought of a driver and manufacturer championships in the Cup series?

Rushbrook: It is a sigh of relief but the pressure isn’t gone because the expectations is to go do it again next year. That’s the intent, right? We want to continue the momentum. Yes, we’ve enjoyed some celebrations since the checkered flag at Homestead but everybody is back in full-throttle working hard toward 2019.

What kind of champion is Joey Logano for Ford Performance and NASCAR?

Rushbrook: Joey is fantastic. On the track, obviously with his skill and the level of aggression and the ability to go get it. On that final restart at Homestead, I will remember this forever, seeing Joey pass Martin (Truex Jr.) the way that he did, with confidence and conviction he was going to get past him in that corner. What he does on track is unquestionable. But what he does off the track is incredible – and I’m glad to see it’s been recognized in addition to this championship. From giving out Thanksgiving dinners the night before the final race, the impact of his foundation and how he used appearance at the Cup banquet as a platform to further some of his foundation initiatives.