When it came time to qualify on Friday at Las Vegas Motor Speedway, Trevor Bayne and his Motorcraft/Quick Lane crew picked up their pace significantly and grabbed the 16th starting position for Sunday’s Kobalt Tools 400. Bayne’s qualifying lap at 186.538 miles per hour put him in a tie with Tony Stewart, but Stewart got the 15th starting spot per NASCAR rules as his team is higher in owner points that Bayne’s Wood Brothers crew. The owners points, at this point in the season, are based on last year’s final standings. 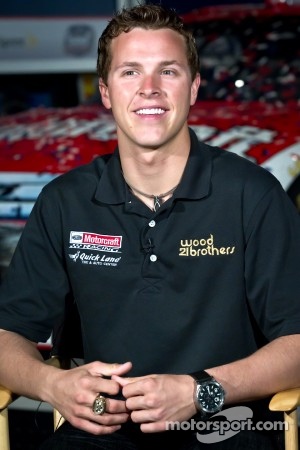 But for Bayne and his crew, the improvement over their practice speed - 27th fastest with a best lap of 184.150 mph - was more important than which side of Row 8 they’ll start on Sunday.

“We picked up three tenths of a second from our best time in practice,” said team co-owner Len Wood, adding that his team’s affiliation with Roush Fenway Racing played a big role in the team’s qualifying performance at Las Vegas, where the Woods haven’t raced in several years and where Bayne had never before driven a Sprint Cup car.

“Trevor went and talked to the other Roush drivers to be sure he was running the right line,” Wood said.

The Wood Brothers crew also benefitted from being able to tap into Roush’s technical resources.

“With Roush engineering it’s like you were here last week,” Wood said.

The Donnie Wingo-led Motorcraft/Quick Lane Ford Fusion crew spent the opening laps of Fridays’ first practice session just getting their rookie driver acclimated to the track and to the No. 21 Ford Fusion, since Bayne has only raced at Las Vegas in a Nationwide car, which uses different suspension set-ups than his Cup ride.

“The track is somewhat bumpy, and that’s what he’s having to get used to,” Wood said.

Bayne was pleased with his qualifying result but was hoping for more.

“I ran out of room in the corners,” he said. “I think with another 20 feet we could have had stayed in the throttle and had a faster time, but that's the case for everybody,” he said. “They did a good job with this Motorcraft/Quick Lane Ford Fusion getting it ready for qualifying.”

Wood and Bayne said they’re also encouraged by the overall performance of the Ford contingent, as Fusion drivers, led by polesitter Matt Kenseth, swept the top four spots in qualifying.

“It looks like it’s going to be a good weekend for Fords,” Wood said.

The Kobalt Tools 400 is set to start just after 3 p.m. on Sunday with TV coverage on FOX.