It was a very Happy Father’s Day for Greg Biffle as he won Ford Racings 1,000th NASCAR race by holding off a late race charge from Jimmie Johnson to win the Quicken Loans 400. Biffle took over the lead late and bested Kevin Harvick after the second place car of Jimmie Johnson cut a left front tire in turn two with less than five to go. Today’s race marks the second consecutive Michigan race that Greg Biffle won (won fall race of 2012) and the Quicken Loans 400 is Biffle’s first of the 2013 season.

The Quicken Loans 400 began with Kurt Busch pressuring Carl Edwards for the lead. On a slick race track, Busch slid up into Edwards, causing Edwards to back out of the throttle which sent Kurt Busch to the lead. The first caution of the race would come when the 51 of Bobby Labonte spun out in turn 2 and collected Jeff Gordon in the process.

Leader Kurt Busch held onto the lead until lap 29 where he would snap loose off turn two and back into the wall. Early on many drivers were wrecking loose off the treacherous turn two. The next two cautions would be caused by debris while the Hendrick cars of Jimmie Johnson, Kasey Kahne and Dale Earnhardt Jr took turns leading the race.

Kasey Kahne looked to be the most dominant car of the race until he cut a right front tire and pounded the wall. Kahne would be OK but his day was ruined. This caution handed the race lead back to Dale Earnhardt Jr who sped away from Matt Kenseth on the restart. Jr’s reign as leader came to a quick halt as he would drop a cylinder and eventually blow up at lap 131.

Jimmie Johnson made quick work of Earnhardt Jr’s motor going sour. Once the caution came out for Jr’s motor exploding, Johnson’s crew chief Chad Knaus decided to take four tires whereas the rest of the leaders took two. This put Johnson back to 19th in the running order. Carl Edwards would win the battle off pit road. Edwards would hold off a charge from Joey Logano but couldn’t however hold off teammate Greg Biffle as he blew past him. 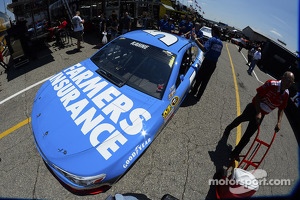 The final green flag pit stop began with the second place car of Carl Edwards pitting for four tires. Race leader Greg Biffle came down to pit road but just as Biffle was completing his stop, Jamie McMurray blew a right front tire on lap 168 and brought out a caution. Edwards would be trapped a lap down but Biffle would luck out and come back around to take the lead. Edwards got burned and fell all the way back to 24th.

Biffle held off Kevin Harvick until Jimmie Johnson raced up and passed Harvick. Johnson’s flat tire made it four for four when it came to problems for Hendrick Motorsports. Biffle’s victory proves that even though Roush Fenway Racing appears to have taken a step back this year, they are still the team to beat at their home track of Michigan. NASCAR heads out west to the Sonoma Raceway, which is one of the two road courses Nascar visits every year. Sonoma is definitely a wild card on the Sprint Cup Schedule and one to be sure to tune in for as the past eight races at Sonoma have yielded eight different winners!

Dale Jr. on Next Gen's 'surgical' steering and the challenge it presents