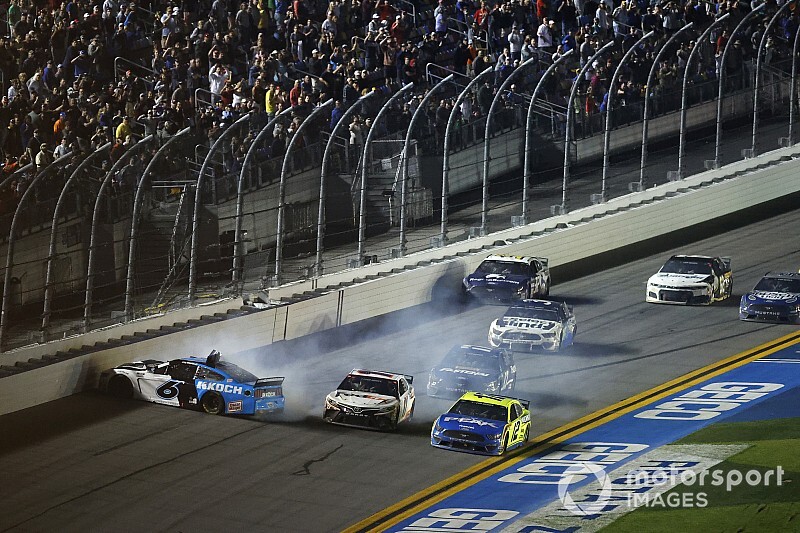 Ryan Newman is in serious condition with non-life-threatening injuries following a violent airborne crash on the final lap of Monday's Daytona 500.

Newman had taken the lead of the 500 on the white flag lap with a push from fellow Ford driver Ryan Blaney.

Blaney then got a shove from defending race winner Denny Hamlin, allowing him to get a strong run on Newman coming to the finish line.

Newman was able to block the run as the field entered the tri-oval, but ended up hooked off the nose of Blaney's No. 12 machine, sending him upside down in a violent crash. Denny Hamlin would win the race in the second-closest finish in 500 history, while Newman was transported to a local hospital with unknown injuries.

The extent of Newman's injuries remain unknown, but a Monday night statement from Roush Fenway Racing stated he was in "serious condition" but "doctors have indicated that his injuries are not life threatening."

Blaney finished second to Hamlin, but was obviously more concerned with Newman's well-being after the race.

“We pushed Newman there to the lead and then we got a push from the 11 (Hamlin)," he explained. "I kind of went low and he blocked that and so I was committed to pushing him to the win and have a Ford win it. I don’t know. We just got the bumpers hooked up wrong and I turned him. I hope he is alright. It looked pretty bad. I was trying to push him to the win. I don’t like saying that things just happen because I feel really bad about it. It was a close one. I just hope Ryan is alright.”

After the No. 6 RFR Ford Mustang went upside down, Newman was struck in the driver-side door by an oncoming Corey Lajoie, sending the car into the air a second time.

"The narrative kind of changed a little bit. I heard he (Newman) went straight to the hospital," a concerned LaJoie said after leaving the infield care center. "That’s obviously scary. I got a big push there that last coming to the white. I don’t know who was pushing me and I kind of stalled out and I don’t know who hooked Newman. I was hoping he would kind of bounce off the fence to the left, but he didn’t and I hit him. I don’t know exactly where I hit him. I haven’t seen a replay.  It was some scary stuff.  Don’t’ get me wrong. My car was on fire. My seat belts grabbed all sorts of areas, but it was a good day for us. I hope Ryan is OK.”

Roush Fenway Racing released a statement Tuesday afternoon, saying Newman is "awake and speaking" following Monday's crash. No other details regarding his injuries were given.