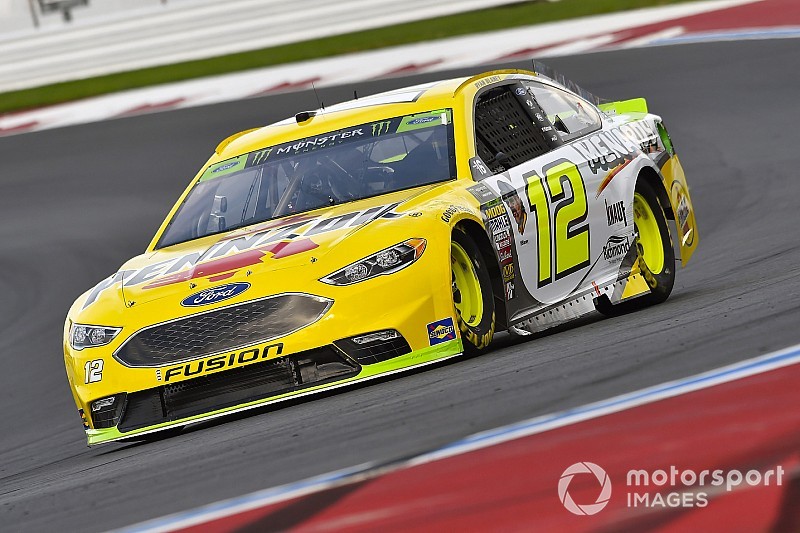 Ryan Blaney held off Jimmie Johnson to win Stage 2 of Sunday’s Bank of America 500 on the Charlotte Roval.

The stage win is the sixth this season for Blaney, who is trying to advance to Round 2 of the Monster Energy NASCAR Cup Series playoffs.

Following the break between Stages 1 and 2, Kyle Larson and a handful of others elected not to pit and remained in the lead when the race returned to green on Lap 30. He was followed by Martin Truex Jr., Kyle Busch and Blaney.

On Lap 31, Blaney moved up into the third position as Kevin Harvick entered the top-five for the first time in the race.

Brad Keselowski, who started the race from the rear of the field, made his way up to sixth on Lap 32.

Justin Marks spun on Lap 33 on the oval track Turn 1 but was able to continue on without a caution.

With 15 laps remaining in the first stage, Larson held a more than 3-second lead over Blaney with Keselowski running in third.

On Lap 36, both Kyle Busch and Truex elected to pit under green as neither pit during the first stage.

Larson, elected to make his green flag pit stop one later, which allowed Blaney to inherit the race lead.

Keselowski elected to pit on Lap 39, which allowed Harvick to move into the second position behind Blaney.

Kurt Busch, who was the first driver off pit road who elected to stop during the stage break, moved into the top-10 with 11 to go in Stage 2.

With 10 laps remaining in the second stage, Blaney held a more than 4-second lead over Harvick, followed by Logano, Paul Menard and Daniel Suarez.

Blaney led with five to go as the same time Harvick elected to make his green-flag pit stop.

William Byron got a flat tire in the chicane, missed the entrance to pit road and drove onto the frontstretch oval to get to pit road, which resulted in a commitment line violation.

With two laps left in the stage, Blaney held a more than 4-second lead over Johnson, followed by Kurt Busch and Logano.

On Lap 49, Keselowski and Truex both spun through the frontstretch chicane but both were able to continue on without a caution after making their respective stop-and-go penalties.

Johnson and Truex crash; Blaney wins in wild finish at the Roval