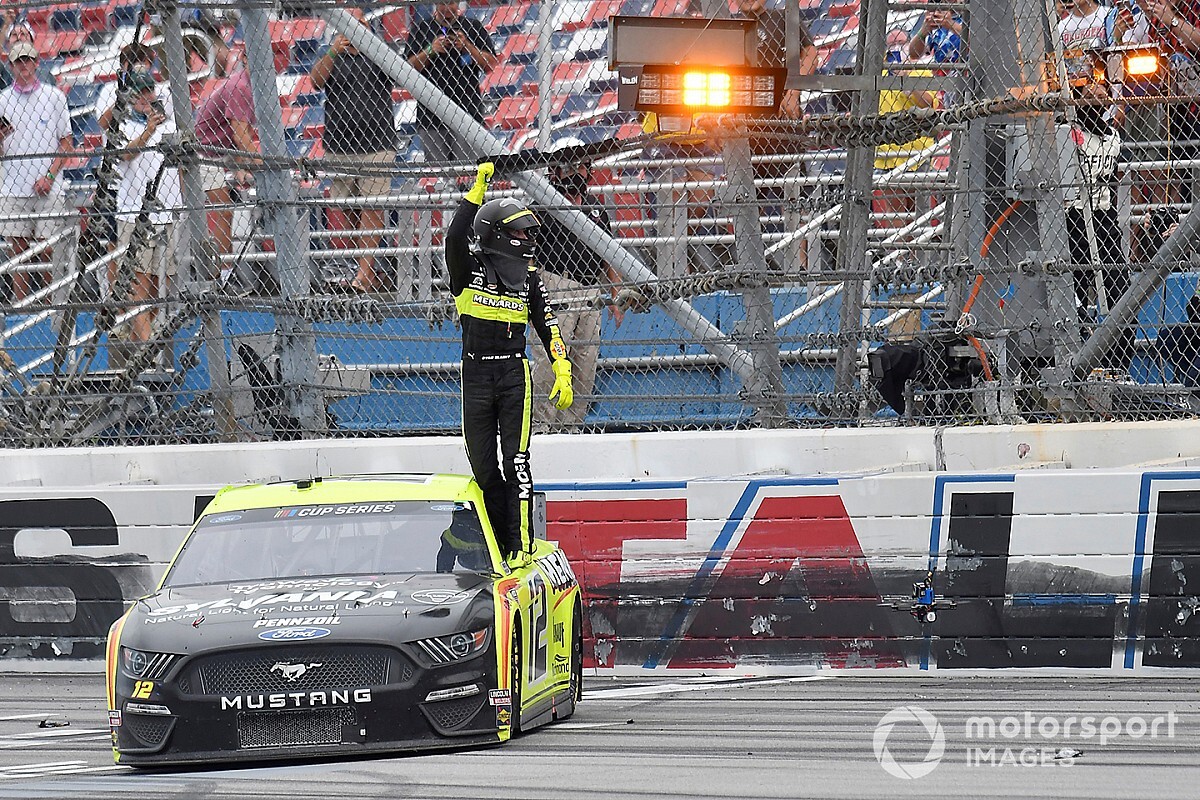 Kevin Harvick took the white flag as the leader but Blaney got some help from Ricky Stenhouse and powered into the lead then furiously blocked Erik Jones to hang on to the victory at Talladega (Ala.) Superspeedway.

The win is Blaney’s first this season, as all three Team Penske drivers have won at least one race this season.

It’s his second consecutive victory at Talladega – and Blaney is the first driver to win back-to-back races at the track since Jeff Gordon in 2007. The win is also the fourth of his career.

"We came back in and topped off (on fuel). We were riding around until about 12 (laps) to go. I was waiting for Kevin (Harvick) to kind of go but he had to save (fuel) more than I did so we just had to get going. You're just sitting there biding your time hoping you saved enough.

"I'm proud of this group, it's been a lot of fun. I just appreciate everybody coming out."

Stenhouse ended up second, Almirola finished third as he came across the finish line almost backwards, Denny Hamlin was fourth and Jones ended up fifth.

Following the break between Stages 2 and 3, several lead-lap cars pit but Buescher and several others remained on the track.

On the restart on Lap 126, Buescher was followed by Hamlin, Ryan Newman, Kurt Busch and Harvick.

By the start of Lap 127, Harvick had moved into the lead. One lap later, Preece powered to the front and on Lap 129, Chase Elliott took over the top spot.

On Lap 134, Elliott wrecked on the backstretch after Keselowski gave him a shove into Logano, who was in front of Elliott.

All lead-lap cars elected to pit, with Blaney the first off pit road. On the restart on Lap 139, Blaney was followed by Logano, Brad Keselowski and Kyle Busch.

On Lap 142, Brennan Poole spun in Turns 3 and 4 to bring out a caution. Most lead-lap cars pit but Christopher Bell was among those who remained on the track and inherited the lead.

On the restart on Lap 147, Bell was followed by Jones, Cole Custer and Corey LaJoie. Stenhouse, the first off pit road, restarted seventh.

Harvick, with a shove from Hamlin, grabbed the lead on the restart. Logano was back out front on Lap 149.

Kyle Busch was forced to pit under green on Lap 151 with a flat tire.

William Byron moved into the lead on Lap 152 as he tried to hold off Logano from reclaiming the top spot.

Byron got shoved out of the way on Lap 161 which allowed Wallace to dive to the inside and grab the lead for the first time in the race.

On Lap 164, Preece got back to the lead while doing battle with Bowman as Reddick moved up to third. With 20 laps remaining, Bowman held on to the top spot with Reddick right behind him.

On Lap 173, Reddick moved out front with Hamlin close behind. Wallace ran third.

With 10 laps to go in the race, Reddick remained in the lead followed by Hamlin, Logano, Bubba Wallace and Preece.

Just as Blaney grabbed the lead on Lap 185, Harvick got a shove into Jimmie Johnson, which sent Johnson spinning into the infield to bring out a caution.

With a push from Kyle Busch, Stenhouse stayed out front and claimed the Stage 2 victory.

Blaney was second, Busch third, Keselowski fourth and Bell rounded out the top-five.

Following the break between Stages 1 and 2, all the lead-lap cars pit with Bowman the first off pit road.

On the restart on Lap 65, Bowman was followed by Johnson, Logano and Blaney.

At the start of Lap 66, Blaney got a shove into the lead, only to see Johnson jump into the top spot on Lap 67.

Kyle Busch moved down to the bottom lane and took the lead on Lap 68 followed by Blaney and Logano. Blaney, with the help of his Penske teammates, moved back to the top spot on Lap 69.

With 20 laps remaining until the halfway mark, Kyle Busch had moved into the lead but continued to battle Blaney for the top spot.

With 40 laps to go in the second stage, Blaney held on to the lead with Logano right behind him. Keselowski was third and DiBenedetto fourth.

Just after the race reached the halfway point, John Hunter Nemechek spun off Turn 4 on Lap 96 and slid through the infield grass to bring out a caution.

All the lead-lap cars elected to pit with Blaney the first off pit road. On the restart on Lap 100, Blaney was followed by Keselowski, Logano and Custer.

Stenhouse grabbed the lead on Lap 106 only to see Blaney take it back on Lap 107.

With 10 laps to go in the second stage, Blaney continued to lead the way with continuous pushing from his teammate, Keselowski.

Exiting off Turn 4 on Lap 111, Stenhouse moved back into the top spot as Kyle Busch ran second. Blaney returned to the lead on Lap 112.

NASCAR displayed a caution on Lap 115 for a large piece of debris on the backstretch. Most lead-lap cars remained on the track and Blaney led the way on the restart on Lap 119.

Tyler Reddick took the Stage 1 victory under caution as rain brought out a 58-minute red flag on Lap 58 of 60.

With no chance to restart the stage before its completion once the race returned to caution, Reddick was awarded the stage win.

Martin Truex Jr., who started on the pole due to a random draw, led the first four laps until Hamlin powered around him and into the lead on Lap 5 thanks to a push from Kyle Busch.

Logano, with a push from Keselowski, moved back into the lead on Lap 15. Hamlin grabbed the lead back on Lap 18.

Keselowski again shoved Logano back into the top spot on Lap 24 as the Penske teammates ran the high line around the track.

NASCAR displayed a competition caution on Lap 26 to allow teams to check tire wire. All the lead-lap cars elected to pit with Logano the first off pit road. On the restart on Lap 30, Logano was followed by Blaney and Hamlin.

With 155 laps to go in the race, Logano remained out front followed by Kyle Busch, Blaney and Hamlin.

With Byron in tow, Kyle Busch moved into the lead on Lap 36 for the first time in the race. Logano reclaimed the top spot on Lap 37 thanks to help from Blaney.

With 20 laps left in the first stage, Byron took the lead for the first time with Hamlin racing him side-by-side. Hamlin edged out front on Lap 42.

On Lap 43, Logano with the help of his teammates, drove past Hamlin and into the top spot. Hamlin reclaimed the lead on the following lap.

Bowman, with help from Reddick, got a shove to the front on Lap 46 but Logano reclaimed the lead on Lap 47. With 10 laps to go in the stage, Bowman reclaimed the top spot.

On Lap 53, Reddick got a shove into the lead followed by Logano and Bowman.

Hamlin fell off the pace on Lap 54 as he appeared to have a flat tire and was forced to pit under green.

On Lap 57, caution was displayed for rain in Turn 1 while Hamlin’s team was still working on his car on pit road. Cars were soon brought down on pit road as the red flag was displayed with Reddick in the lead.

Talladega Cup race halted by rain with Reddick out front