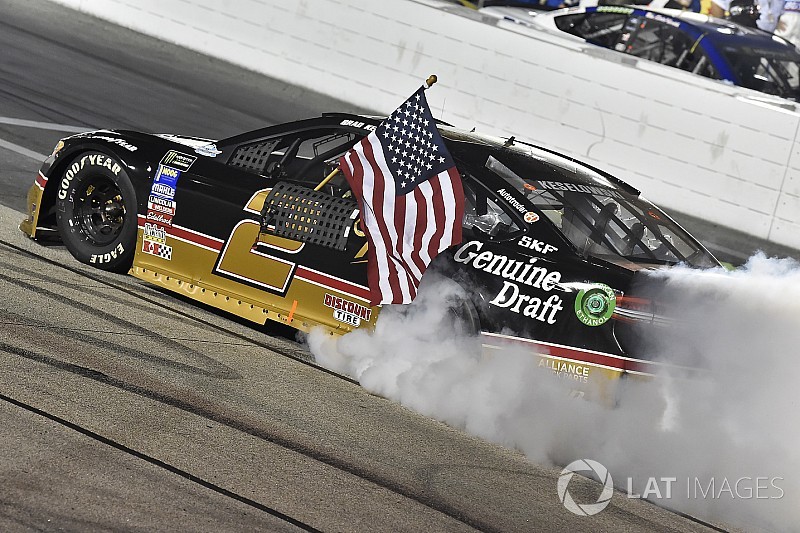 “It makes going to the race track fun, knowing that you’ve won and you can win,” said Brad Keselowski and it’s doubtful the 2012 NASCAR champion felt he couldn’t win, only acutely aware that he hadn’t.

But now he has and the playoffs are drawing closer and Keselowski is a Southern 500 champion.

Pack up the swagger and head on out to Indianapolis, site of the final regular-season stop on the Monster Energy NASCAR Cup Series schedule.

It’s not been an awful season for the No. 2 Team Penske outfit by any means, but for a group that’s used to winning and contending, not being in Victory Lane could be a bit unsettling. Particularly when others were stockpiling victories.

Sunday’s ice-breaker at Darlington (S.C.) Raceway will go a long way in making the team feel better about itself. Not that they were in jeopardy of being left out, but confidence is a pretty powerful tonic.

“It’s been a tough year,” crew chief Paul Wolfe said afterward. “Usually we’ve won a race by now, and you start to feel that season coming to an end and yeah, we were kind of locked into the playoffs on points, but you know most of us on this team are here to win races.

“That’s why we do this. That’s why we get up every day and go to work – to win races, whether we’re in the playoffs or not.”

It isn’t a requirement to win races in order to qualify for NASCAR’s 10-race playoffs, and a driver could actually win the championship without going to Victory Lane.

That has yet to happen and no one wants to be the first.

As Wolfe noted, teams show up to win.

And since 2010, Keselowski’s first full season at Penske, the No. 2 team has done just that. Multiple wins for Keselowski, 34, on most occasions. Sunday night’s victory was his 25th at NASCAR’s top level.

The victory guaranteed Keselowski a spot in the playoffs but what did it say about how his team will perform once the playoffs start?

The good teams are so close today, the smallest things can make a difference and that seemed to be the case Sunday when Keselowski beat Kyle Larson off pit road. That put him in control of the restart and was enough of an advantage that he was able to maintain the top spot for the remaining 22 laps. Even though Larson’s No. 42 Chevrolet had dominated the race up until that point.

The race off pit road was won in part because of another seemingly small maneuver – a tweak to the team’s pit-road process.

“We’ve had an up-and-down year on pit road,” said Wolfe. “We continue to try to work on that and be better. We did some things different tonight and we’re still learning but it’s a good bit of confidence for those guys … going into the playoffs.”

Wolfe said the change can be detected if one looks, but for now he’ll keep it close to the vest. It was not a personnel change.

“I think you’ve got to look at the strengths and weaknesses of all your guys going over the wall now and decide how you want to make your plays there," he said.

“If you watch close enough, you’d probably see a difference, but I’m not going to talk about it a whole lot.”

The benefits of having won with the playoffs looming are many, from earning bonus points to being able to eliminate the nagging question of “why hasn’t your team won this year?’ "

Victory in itself is confirmation of all the hours of hard work and effort.

“Moments like today are just so refreshing,” Keselowski, the 10th different driver to win a points race this season, said.  “They recharge your batteries so much because the season is such a death march, especially when things aren’t going well.

“This is a complete battery recharge for myself and my team.”

Martin Truex Jr. on pit road issues: "We have to clean it up"