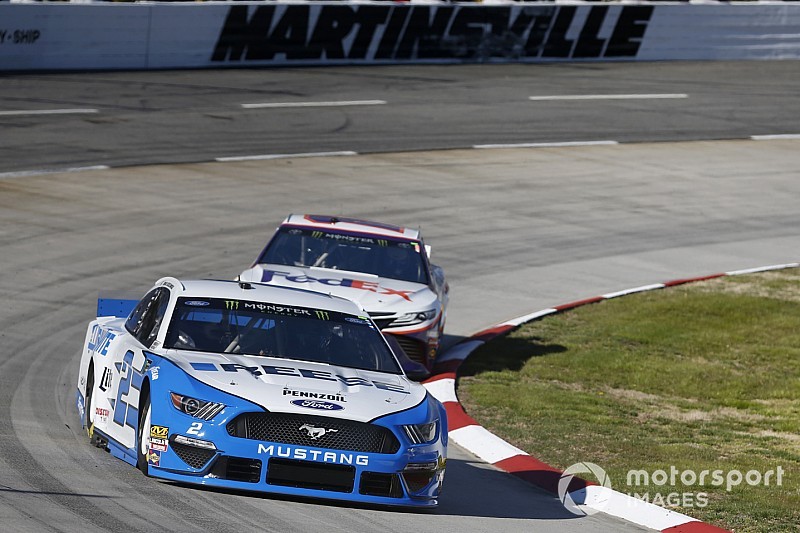 Brad Keselowski dominated on his way to the Stage 2 victory at Martinsville (Va.) Speedway, leading every green-flag lap.

For most of the 130-lap stage, Chase Elliott tried to stay with Keselowski and by the end, Ryan Blaney had worked his way up to second but he, too, was unable to attempt a pass on the leader.

Following the break between Stages 1 and 2, Keselowski was once again the first off pit road and remained in the lead when the race returned to green on Lap 142.

He was followed by Elliott, Hamlin, Blaney and Almirola.

On Lap 147, NASCAR threw a caution when fluid was reported in between Turns 3 and 4 and a broken axle shaft was found near the curb. It appeared to come from the No. 15 of Ross Chastain who had gone to the garage a lap earlier. The race returned to green on Lap 154.

On the restart, Hamlin moved up into second while Elliott dropped to third.

On Lap 175, Keselowski had moved out to about a 1-second lead on Elliott with Hamlin stuck in third.

With 70 laps left in the second stage, Blaney moved up to the third position as Hamlin dropped to fourth. Almirola remained in fifth.

On Lap 210, Keselowski put Jimmie Johnson – a nine-time winner at the track – lap down.

With 40 laps to go in the second stage, Elliott remained close behind Keselowski but could not seem to make up any significant ground.

There was little movement among the top five with 30 laps to go in the second stage. Keselowski could not pull away from Elliott but Elliott could not seem to get close enough to attempt a pass for the lead.

Blaney was able to work his way around Elliott to take the runner-up position on Lap 242.

With 10 laps remaining in the stage, Blaney was deftly trying to work his way past lapped cars to get in position to challenge Keselowski for the lead.

Keselowski fends off Elliott for Stage 1 win at Martinsville