Bowman was unable to regain the track position lost during his visit to the garage area and finished the race in the 41st position.

Alex Bowman and the No. 23 Dr Pepper Toyota Camry team finished in the 41st position at Phoenix International Raceway after racing inside the top-30 in Sunday's 312-mile event in the Arizona desert. Bowman suffered a broken spindle in the right front suspension, which required a long trip to the garage area mid-race and removed the team from contention.

Bowman started the race in the 35th position, but quickly began his charge through the field picking up five positions in just the opening 10 laps. As the race unfolded, Bowman worked closely with his Dr Pepper team to fine-tune the handling on his Toyota Camry. With minor air pressure adjustments, the BK Racing team had Bowman's car handling to his liking by the halfway point. 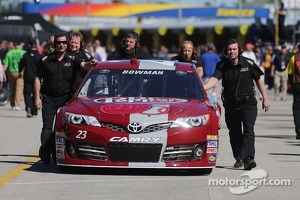 Nearing lap 200, Bowman called in to his crew to report something amiss in the front suspension. Just eight laps later, Bowman brought the No. 23 Dr Pepper Toyota Camry down pit road and ultimately to the garage as the team diagnosed a broken spindle in the left front suspension. An intricate fix cost the team more than 50 laps on the track and removed Bowman from contention for the afternoon. In a race where few teams suffered problems, Bowman was unable to regain the track position lost during his visit to the garage area and finished the race in the 41st position.

"Some days racing can be a lot like riding a roller coaster-there are a lot of highs and lows," commented Bowman. "To qualify for my first Daytona 500 last week was huge for my racing career. We came to Phoenix this week and again qualified for the race, which was a great accomplishment, so this was not the way we wanted our weekend to end. My BK Racing guys built me a great Dr Pepper Toyota Camry and we were able to race through the field. There's nothing that we could have done to prevent a broken spindle; sometimes parts fail and there's nothing you can do to change that. We got back on the track and regained the positions we could. That's all we can do-just not give up. I'm proud of the effort of my team today, and I'm looking forward to racing in Las Vegas next week."

The NASCAR Sprint Cup Series will continue its west coast tour with a stop at Las Vegas Motor Speedway for the Kobalt 400 on Sunday, March 9.

Tough race for Truex at Pheonix