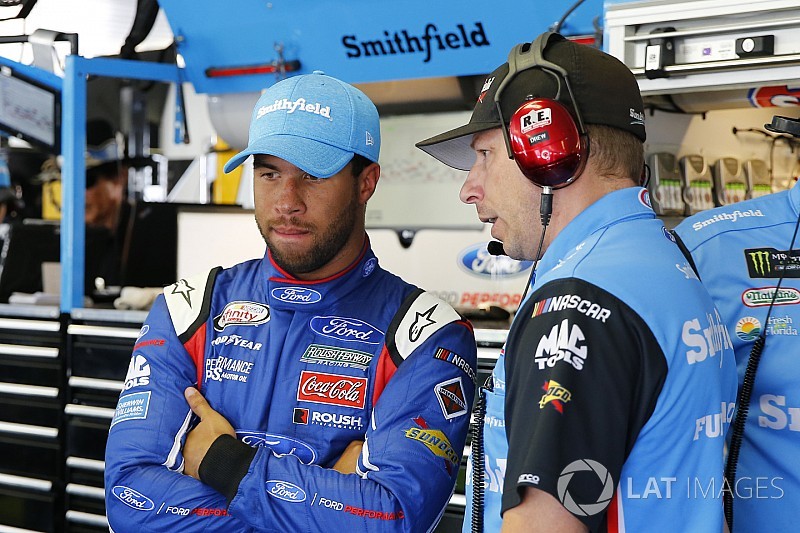 By all accounts, Darrell Wallace Jr., has passed his audition for the Monster Energy Cup Series.

For three of the last four races, the driver affectionately known as “Bubba” has filled in for the ailing Aric Almirola in the No. 43 Richard Petty Motorsports Ford.

“Bubba has been great,” crew chief Drew Blickensderfer told Motorsport.com. “He’s got speed. He drives well. He gets along with everybody on the team. The kid is competitive and when he gets out of the race car, he’s completely productive in the way he wants to treat myself and everybody on the team to try and get better.

“That’s what you want to see. Seeing it from afar, you never know when I guy gets out of a race car if the way he acts towards the team and when you get up in the lounge is going to be productive or destructive. And Bubba’s been nothing but productive.”

Almirola fractured his T5 vertebra in a vicious wreck at Kansas Speedway on May 13. After extensive rehab — and time to heal — he was cleared by his doctors to race on June 28. He will test with the team on Tuesday at Charlotte Motor Speedway.

For Wallace, the opportunity to race in NASCAR’s top tour has been a humbling experience for the 23-year-old Mobile, Alabama native.

“It’s meant a lot,” Wallace said. “Honestly, I’m at the Cup level but don’t feel it. It’s been another stroll in the park and we’re trying to make the most of it. We’re continuing to grow together and get comfortable together and the speed is starting to translate into that. It’s been fun. It’s been a fun four — going on four — races for me. I’m trying to take it all in and learn as much as I can.

“I don’t know when Aric will be back. I think it’s next week. If it is, I will make this race the best one yet.”

Blickensderfer has been pleasantly surprised by the rookie’s performance — and his ability to keep morale high on the team. For the first time in Wallace’s career, he spent time on top of the speed chart during Happy Hour at Kentucky Speedway on Friday. He ended up ninth at the end of the session.

He finished 26th in his first outing with the team last month at Pocono but in his subsequent starts, the 23-year-old improved with a 19th-place performance the following week at Michigan and scored his first top-15 result last Saturday at Daytona International Speedway.

“Obviously, he has the speed. His self-proclaimed worse race track (Pocono) was his first Cup start and he qualified 12th in his first round of qualifying and ended up qualifying 16th. Without all those penalties, he had a 15th-place car. At Michigan, he did great. This week we were ninth in practice and he’s got speed right off the get-go.”

Starting at 16, Wallace began climbing the NASCAR ranks. He won his first race in his K&N Pro Series debut at Greenville Pickens Speedway in 2010. He won again at Lee (NH) Speedway later that season before finishing third in the standings. Wallace scored three more wins the following year before finishing a career-high second in points.

After turning 18, Wallace dabbled in four Xfinity races in 2012 in conjunction with this K&N schedule. He won the pole at Dover and scored thee top-10 finishes along with a 12th-place result. Wallace had solid results when he graduated to the truck series with Kyle Busch Motorsports. He scored five wins in two years and finished third in the 2014 standings before returning to  the NXS tour with Roush Fenway Racing.

Wallace was extremely consistent in the No. 6 Ford but in 78 starts, but never found Victory Lane.

“Bubba is one of those guys that maybe needed to have more horsepower and less downforce to perform at his highest,” Blickensderfer said. “We didn’t see Jimmie Johnson potential until he got to Cup.

“And I think Bubba might be one of those guys that when you give him horsepower and less downforce he can perform at a higher level than some.”

Wallace finished sixth in five consecutive NXS races this season with RFR but couldn’t crack the top-five. In 10 of 12 races, Wallace remained in the top-five in the standings due to his consistency.

“Maybe I just sucked in the Xfinity Series,” Wallace joked. “I couldn’t pull one off. My best was second. But it’s been a different challenge finishing out these cars. I think the biggest thing is you can make speed with these cars at the big tracks. In an Xfinity car you really can’t make speed. Maybe that’s where I was struggling and I just didn’t know it.

“But I can’t thank everybody enough at RPM, Ford and Smithfield for putting me in the seat, giving me some seat time while Aric heals up and gets back 100-percent. I’m just having fun.”

Blickensderfer feels Wallace is ready for Cup. With the right sponsorship, he believes the rookie could flourish.

“Everybody has been pleased with what Bubba has done,” Blickensderfer said. “From our ownership group to our management group, everybody has said nothing but great things about Bubba from the time we unloaded the car at Pocono for his first start, from the way he treated everyone here from a driver to the sponsor representative to how he raced that speedway race last week.