Darrell “Bubba” Wallace Jr. has dismissed the hype following his runner-up finish in his first-ever start in the Daytona 500 in 2018. 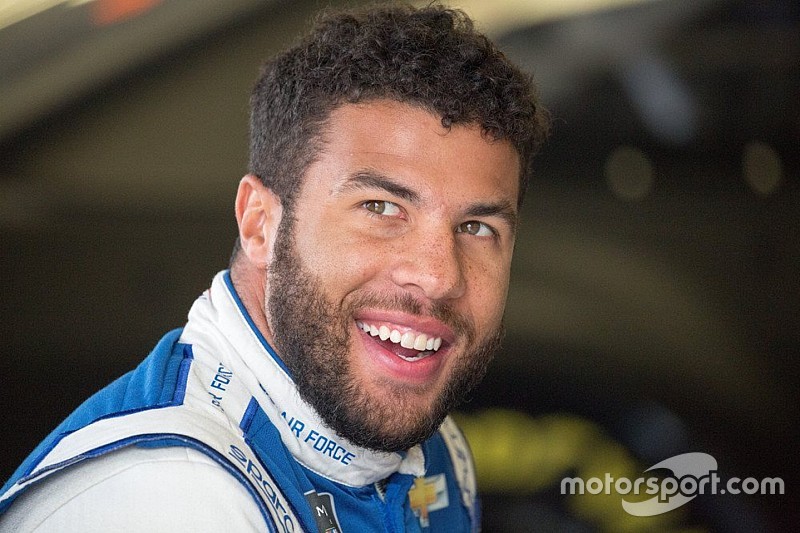 The 25-year-old driver pushed Austin Dillon and his No. 3 Chevrolet to Victory Lane en route to finishing second, which is still the highest-place finish of his young Cup Series career.

“A lot of people hype this story up as, ‘Oh, you’re going to do it again,’” Wallace said. “It’s like like let’s pump the brakes. Let’s get through this week and let’s make it to Lap 199.

“Let’s stop and have a break and do an interview on that last lap and see if I have a shot. If I make it to 199, then hell yeah I’m going to go for it.”

Following his record-breaking finish in 2018, Wallace sat in front of reporters and began to break down in tears, before hugging his mother, who ran up to the podium to congratulate his son.

“Obviously, the media center was a highlight,” he said. “Shed a little tear for TV ratings. That was all part of the plan. It worked out; got a lot of people on my side after that. Got to pump up the waterworks again this year. Other than that, it was just taking in the first race of the rookie year. Being able to accomplish it the way we did was pretty cool.”

“Coming into the season last year, there’s no way in hell I would have thought that I would finish second in my first Daytona 500 attempt,” he said. “I thought I’d go out and cause the ‘Big One.’ … To be able to do that and almost come out on top and push the No. 3 to Victory Lane was pretty special.”

Wallace’s young racing career has been tumultuous at times. After various complications, Wallace ended the 2017 season without a full-time ride in any of NASCAR’s national series.

Spending that offseason looking for a ride, Wallace soon linked up with Richard Petty Motorsports, who offered him the opportunity to drive the famed No. 43 car for RPM in the Cup series in 2018.

This season, however, Wallace endured a stress-free offseason, knowing that he didn’t have to find a ride for 2019.

“Every other offseason, it’s like, ‘Well, what are we doing?’ ” Wallace said. “Now, knowing for certain that I’ll be climbing in the No. 43 for my second season – sophomore season – in Cup is incredible.

“Thanks to everybody. I’m just living the dream. Thanks to everyone at RPM for giving me this opportunity, ‘The King’ (Richard Petty) for allowing me to go out and try not to wreck any more cars.”

After the 2018 season, Wallace’s crew chief, Drew Blickensderfer, resigned from RPM to take the same position with Front Row Motorsports. It was just one of many changes RPM went through in the offseason.

Derek Stamets, who was RPM’s lead engineer last season, will now be on top of Wallace’s pit box this season.

“It’s going to take time to grow together,” Wallace said. “We got a new crew chief, new car chief. We’ll try to get some new (sponsor) partners throughout the season as well. We’ll look to keep pressing forward.”

While Wallace is relieved to have a full-time ride, he is still looking for a “big-time sponsor.”

Wallace said he was unsure of what his exact sponsorship looks like this season but said he was “baffled” he still can’t find a big corporation to latch on.

“I don’t know the number (for sponsorship), but it’s been 16 years of trying to land that big-time sponsor,” he said. “FedEx and Mars are probably the two biggest now. Lowe’s is leaving, so I know that scene is gone, but we’re still looking for big corporations to take part in our program.”

KHI Management adds pair of Cup drivers to its stable