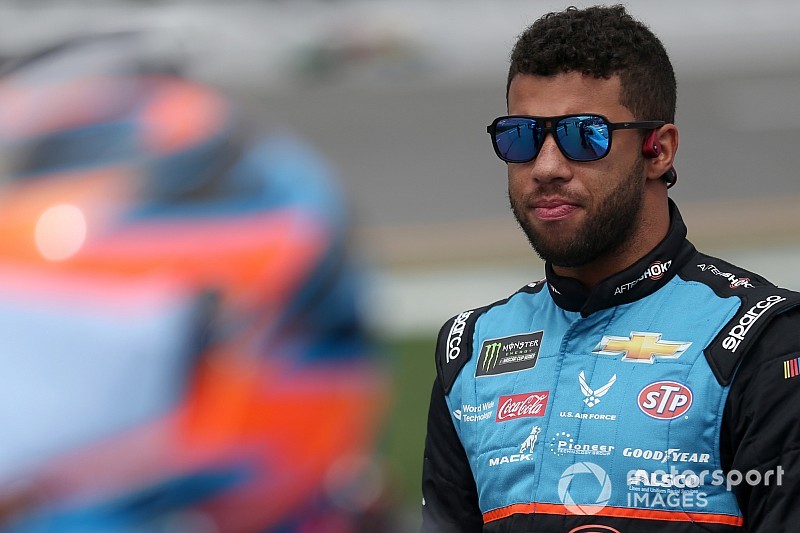 After experiencing both highs and lows in the first Roval race at Charlotte Motor Speedway, Bubba Wallace is ready to return.

After helping Granite Contracting from Cornelius, N.C., move some dirt in preparing the newly redesigned backstretch chicane for the Roval on Tuesday, Wallace talked about getting a chance to race the unique layout again this fall.

“It’s going to give us a better option to go through there and attack a little bit harder,” Wallace said. “We’re definitely going to be slowing down a bit more than what we were last year. I think the biggest thing we have is that we’ll have runoff room now.

“We didn’t have runoff room last year until I made runoff room (by crashing in practice). I led by example, unfortunately.

The upgraded backstretch chicane debuts with qualifying on Sept. 27.

“Some drivers, like Bubba, tried to widen it on their own but after taking some consideration, we’ve decided to widen it on our own,” said Greg Walter, Charlotte Motor Speedway's executive vice president and general manager.

“It’s a great passing zone and a great area for side-by-side racing. Bubba’s a great sport. He understands that we’re doing what we can to make the racing better for them.”

For Wallace, he hopes to improve on his performance on the only race on the Monster Energy NASCAR Cup Series that incorporates elements of the oval track and infield road course in a points event.

“We’ll definitely be slowing down from the speeds we ran last year but the biggest thing is we’ll have runoff room,” said Wallace. “We didn’t have that (last year) until I made room.”

Wallace was making reference to heavy contact with the tire barrier at the exit of the backstretch chicane last year that forced him to go to a backup car for the race.

Despite his tough luck prior to the race, he felt the new event brought a new level of interest and excitement to the sport and its fans.

“I think it was an exciting race for the fans and something new,” Wallace said. “What (Charlotte Motor Speedway President) Marcus (Smith) and his staff have done here for the sport of NASCAR giving them something new.

“The infield part is very treacherous and there is not much runoff room for that and it gave a new insight for the fans and a thrilling finish. Fans were excited and we didn’t know what to expect and I put myself in a bad spot multiple times but I thought I did alright in the race.

“We’ll see what we got when we come back.”

Denny Hamlin still a contender in an 'old man's sport'