Bubba Wallace: "We get paid to race, not fall in line" 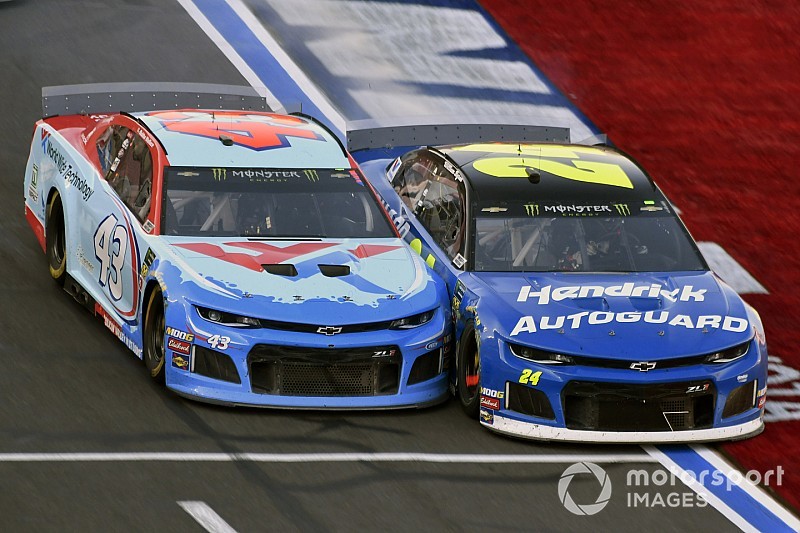 Bubba Wallace isn’t the first to criticize drivers in the NASCAR Cup Series who complain about hard racing from competitors but he may be among the most vocal.

A media session Friday at Las Vegas Motor Speedway that was mostly spent glowingly rehashing his popular third-place finish last week at Indianapolis ended up morphing into a discussion about how some veteran drivers dislike being “raced hard.”

He began by recounting an incident with Ryan Newman at Darlington two weeks ago during which Newman directed an obscene gesture toward him at one point on the track for a move he didn’t appreciate.

“Walking through the garage last weekend in Indy, he said something like, ‘Ah, I was kind of frustrated but no harm, no foul,’ and I was like, ‘Oh yeah, it’s just you old guys just hate being raced at any time on the race track,’ ” Wallace said.

He noted the hypocrisy of the criticism when an initial move from the other competitor is often what puts Wallace into the position of having to adjust his line on the track.

“You forced me to make a move, and I’m not going to sit there and ride behind you and get passed and get put three or four-wide, so I’m going to make the move and get by you,” he said. “So, it’s different. I love how aggressive we race.

“That’s what I was taught growing up. Be as aggressive as you can, as clean as you can, there’s a fine line, I’m not out there pin-balling off other cars and wrecking people, but if the opportunity presents itself to me to force the issue on you, absolutely that’s going to happen.”

In the spring race at Las Vegas this season, Wallace said he and drive Ryan Preece “raced the absolute crap out of each other” for a position on the track and after the weekend Wallace sent a text message to Preece apologizing for the “hard racing.”

“He was like, ‘Dude, why are you apologizing for racing hard?’ And I was like, you know what, you’re absolutely right. We were racing hard, we got out – we didn’t shake each other’s hand but we weren’t pissed off at each other, it was just one of those days. It’s what we do,” he said.

“We get paid to race, not fall in line and not race the other guys as hard. I don’t know if you were racing 20 years ago in this series and it wasn’t like this. Well, it’s a new day. (Expletive) changes every day. Get accustomed to it.”