Kyle Busch misses out on sweep: “I screwed up our day” 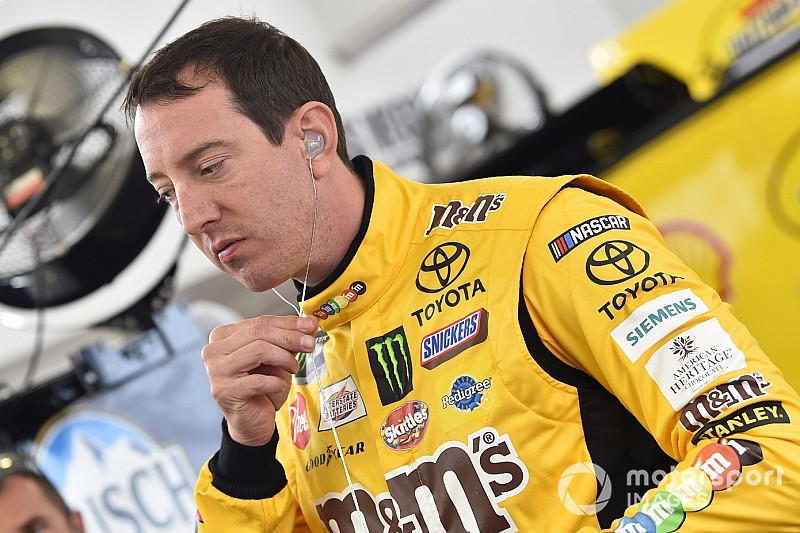 After starting third and moving into the lead early in the Pennzoil 400, a speeding penalty robbed Kyle Busch of his shot to sweep the weekend at his home track.

After dominating the NASCAR Truck and Xfinity Series aces on Friday and Saturday, Busch was determined to complete the hat trick and sweep the weekend at Las Vegas Motor Speedway.

Unfortunately, a speeding penalty while leading put him back in the field and forced him to fight his way back through the pack. The loss of track position hurt Busch’s opportunity to battle for the win in the closing laps.

While attempting to make a green-flag pit stop on Lap 129, Busch was traveling too fast on entry and had to serve a pass-through penalty under green-flag conditions.

While Busch was able to rebound and score a top-three, he couldn’t hide his frustration after the race.

“The cars just don’t have any speed,” Busch said. “You’re (running) wide open just trying to suck off any cars in front of you to get a draft. I was running 31 (seconds) flats and when I would get there I stalled out to 31.40s because the wind was just so bad you couldn’t corner anymore or maneuver.

“If they ran low, I couldn't run high; if they ran high so you're always trying to figure out which way to go, and I certainly screwed up our day.

“If we didn’t have the speeding penalty on pit road, we would have won this race, but the guys gave me a great piece and we were certainly fast there at the end.”

Busch smoked his tires coming to pit road for the first pit stop of the day and felt some changes to their car might have contributed to the penalty.

“Coming to to pit road we tried a different brake package this weekend trying to make up time and get a bigger jump,” said Busch.

“We had to come from the back and I think we had to pass the most cars today so we were the most impressive today but that doesn’t matter because we don’t have a trophy. Whatever. Next week.”

Keselowski says he was "a touch too nice" to Logano