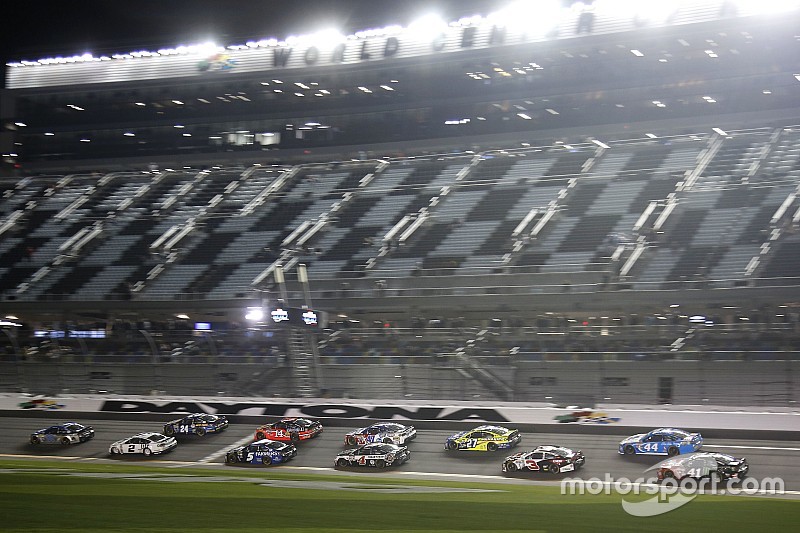 With the charter system locking 36 teams into the race and a reduced field size of 40 cars, that means there are just four spots up for grabs in the 58th running of the Daytona 500.

Two of those positions have already been claimed by Ryan Blaney/Wood Brothers Racing and Matt DiBenedetto/BK Racing.

Blaney and DiBenedetto already locked in

"It is really nice to be locked in," Blaney said at Media Day. "That is the main goal to be honest with you. It gives us a lot of relief going into Thursday’s Duel that we didn’t have last year. It is nice to have a little security and be able to go run our race and not always worry about what could happen or stressing over anything.

"They brought us a fast car. It is a credit to the Wood Brothers and Penske team and everyone back at the race shop."

DiBenedetto, 24, came into Speedweeks as a rookie this year, having never attempted the Daytona 500 before. He also had a TRD engine under the hood for qualifying (will have Triad for race day).

"I was really nervous about (qualifying) amongst other things," he said during his breakout session. "Since I am running a full season in the 83 car moving forward after Daytona, I really didn’t want to have that much of a setback starting the year in points by missing the 500. I hated having that in the back of my mind."

McDowell just misses out in qualifying

Joining Blaney in Duel 1 will be Michael McDowell, Cole Whitt and Josh Wise. Both Whitt and Wise come to Daytona with new rides for 2016. The qualifying time put down by DiBenedetto was just two hundredths clear of McDowell, who is now on the outside looking in.

"It’ll drive you crazy, wouldn’t it; two hundredths of a second," McDowell said. "You know, the thing is, I got through the gears well. I think I maximized everything I could, so there wasn’t a whole lot that I could’ve done different. But there are always ways to find two hundredths; it’s the same for everybody. But you got to be a little bit, to me, I just let it go a little more than that and we just didn’t get in. We’ve got do it on Thursday.

“Still makes you nervous. I’ve been in this position every time, I’ve never been locked in. But I’ve missed some too. You remember that and it’s not a position that you want to be in."

In Duel 2, DiBenedetto is joined by teammate by Robert Richardson Jr., David Gilliland and Reed Sorenson. Gilliland lost his full-time gig with Front Row Motorsports to Landon Cassill at the end of last year, but he is back with the team in what is a one-race deal at the moment, driving the No. 35. He has to be the favorite among this bunch with the success he's enjoyed in plate races, including a third-place finish in the 2011 Daytona 500.

Interestingly enough, the No. 40 team apparently had Sorenson not run his qualifying lap at 100% throttle to ensure they were in the second Duel race.

But if you're looking for an underdog story in these qualifying races, you won't have to look any further than Robert Richardson Jr. The 33-year-old is attempting his first Sprint Cup race since the summer of 2012, wearing a repurposed Nationwide fire suit.

He told Motorsport.com that he actually got the call to run the 500 while he was working on his pasture. Richardson missed the last Daytona 500 he attempted in 2012, so how's he feel going into this one?

"I'd say I'm pretty comfortable with it. It's just a blessing to be here. Two weeks ago, I was mowing a pasture and I got the phone call that we were going to do this deal for the Daytona 500. When we closed R3 Motorsports, I had almost given up, (thinking) I was never going to get back in a race car again.

"My wife and I had a little boy in the first part of December and life is heading in a different direction. Then all of sudden, we get the phone call to do the Daytona 500 and you only get opportunities like this once in a life time."

Richardson will also have two teammates in his Duel race, something could be an advantage towards the finish. "You have your teammates to a certain extent but this race. They're with you until the end but this is the end my friend (laughs) when it gets down to the last five or so. We'll try to work with all the teammates if we can. Everyone gets cycled around out here at Daytona very easily, but for the most part, if we can work with them, that will be the plan."

Majority of Cup teams decide not to participate in Thursday practice