Beleaguered Truex to “come out swinging” in Vegas after Indy DNF 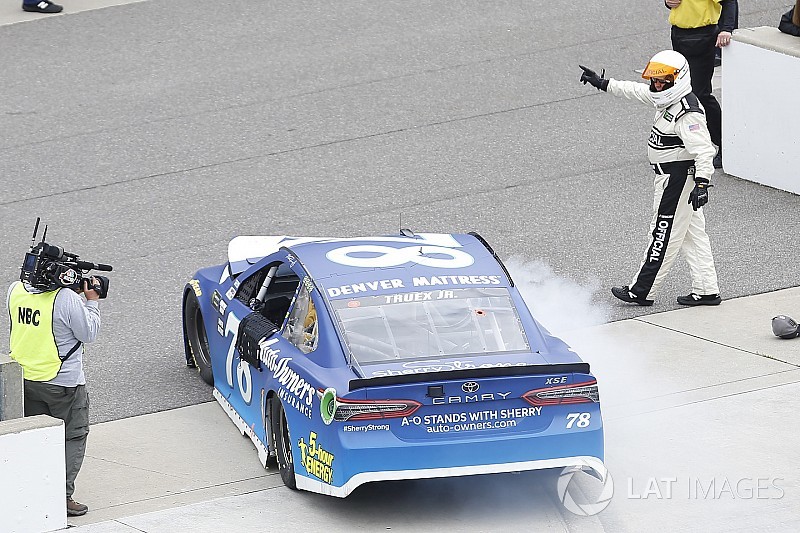 Martin Truex Jr. remained stoic following his early exit from the Brickyard 400 at Indianapolis, his first race for the #78 Furniture Row Racing team since the announcement this week that it will close its doors at the end of the season.

Truex completed just 40 laps when his left-front brake rotor of his Toyota Camry exploded as he approached Turn 1.

He kept the car out of the wall, but the explosion knocked the hood of his car askew, and blew out the oil cooler – making him the event’s first retirement.

“Left-front brake rotor exploded and went through the hood,” explained Truex. “I thought I blew a tire initially going into (turn) one there and I was like ‘oh this is going to hurt’, but the car kept turning luckily and I was able to keep it off the wall.

“I don’t know what was going on with the brakes. We had major issues from the start of the race. Obviously, all that kind of compounded into having a major brake issue. It’s unfortunate.”

Truex, who was forced to start at the rear of the field after his car failed pre-race tech three times, said he was quick despite the brake issue he’d been battling against.

“As hard as it is to pass here, we were getting there making our way to the front,” he said. “I felt like any time we had clean air, we had really good speed. Wish we could have raced all day and seen what we could have done with them, but hopefully we’ll get this bad luck out of the way before the playoffs start next week.”

When asked if the team was keeping a stiff upper lip going into its final races, he replied: “We got a great bunch of guys here. A great bunch of hard core racers. Nobody is going to put their heads down and give up, I can promise you that.

“We’re going to come out swinging in Vegas.”

Hamlin: "I don’t even care about the playoffs" after Indy loss