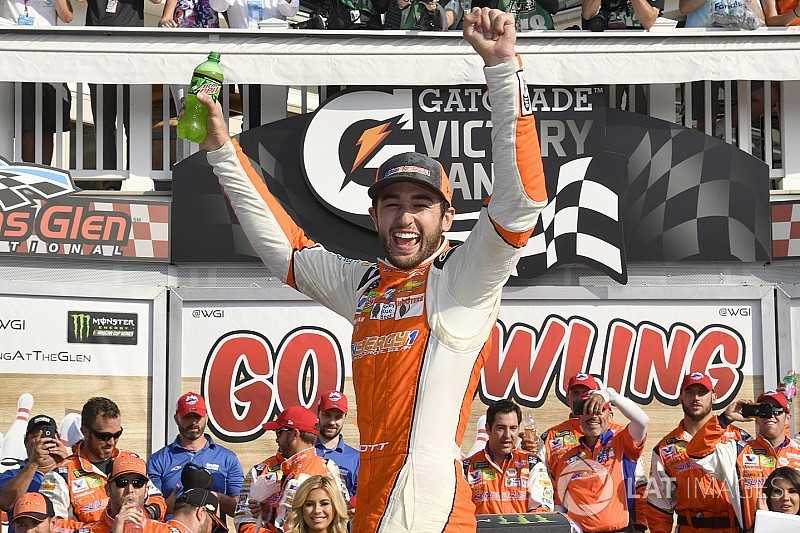 Expectations – and the pressure that comes with them – have followed Chase Elliott’s NASCAR career from its beginning.

The journey to Elliott’s first win in the Monster Energy NASCAR Cup Series and the ups-and-downs that came with it are well documented.

Elliott, the 22-year-old son of Hall of Famer Bill Elliott, captured his first series victory Sunday at Watkins Glen (N.Y.) International in his 99th career start. But along the way – just like his father did – he finished second eight different times before picking up his first win.

As he’s learned to deal with the frustrations of seeing potential victories fall to the wayside for a variety of reasons over the past 2½ seasons, Chase Elliott turned to those around him – family, Hendrick Motorsports teammates and friends – for advice.

“It took us some kind of hard times to get here,” he said. “I had to have a good group around me to keep pushing me and keep making me realize that we weren’t in those positions by accident.”

Sunday morning before the start of the race, Elliott, who is a fan of the University of Georgia Bulldogs, found some additional counsel from Georgia coach Kirby Smart.

“It was funny this morning. I woke up and I watched a video. Kirby Smart had a speech about having pressure is a privilege. And, I had that on repeat this morning in the (motorhome), just thinking about it,” he said.

“I thought we had a chance (Sunday) and wanted to make sure that if we were in a position, to try to capitalize, and we did. What a day.”

The comments to which Elliott was referring were made by Smart at SEC Media Day, which was held last month in Atlanta.

Here is the relevant portion of Smart’s speech:

“This season for us is going to be simple. It’s going to be the measure of potential versus effectiveness. And when I say that, a lot of people are like, ‘Yeah, every team has a certain amount of potential.’ I think potential is dormant ability. And I think effectiveness is what we get out of our potential. And we talk to our players all of the time, the pressure is really a privilege.

“Those are things we embrace at the University of Georgia. We can’t run from those things. We know that. If pressure is a privilege, how you manage that and how you embrace that and our coaching staff getting the effectiveness of our players out is what’s important to us. And that’s really the key ingredient for us going into this season.”

You can watch Smart’s entire opening comments from SEC Media Day here. He talks about having pressure being a privilege beginning at about the 4:46 mark.