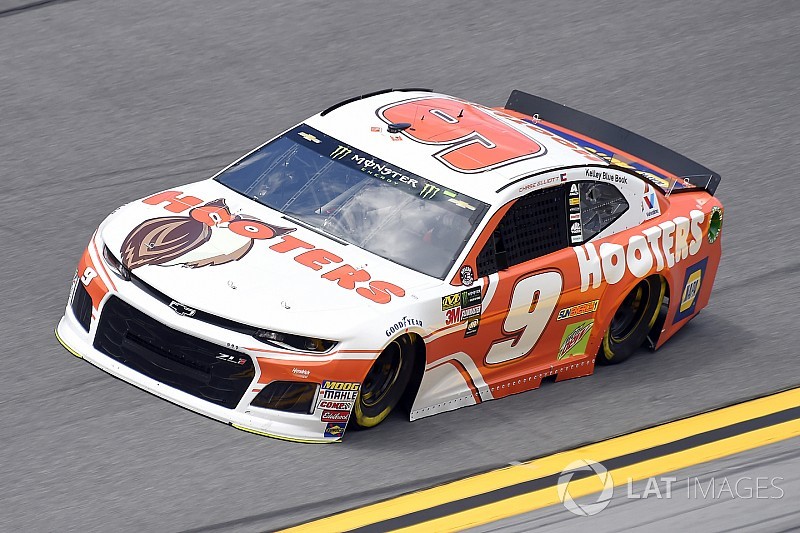 Chase Elliott will lead the field to the green at a superspeedway race … again.

Elliott earned his fourth career pole in the Monster Energy NASCAR Cup Series – all on superspeedways – by outdueling his Hendrick Motorsports teammates on Friday night.

Elliott’s average lap speed of 194.045 mph was enough to claim the top starting position for Saturday night’s Coke Zero 400 at Daytona International Speedway, his first pole of the 2018 season.

“I hope that translates into a lot of speed tomorrow night,” Elliott said. “We put a lot of effort into our superspeedway program at Hendrick Motorsports – the engine shop, the chassis shop, the body shop. They take a lot of pride when we come to these races.

“They pay the same amount of points as the rest of them, so it matters. Our team treats them that way and their hard work paid off.”

Asked what the pole does for the team in general, Elliott said, “I think it gives everybody confidence. The best pit stall is certainly nice. That can matter at the end of these races.

“Sharing the front row with a teammate is nice, too. We’ll just have to see. The race is a little bit different ballgame but having speed is nice.”

Elliott led a HMS sweep of the top three positions in the first round of qualifying, which was delayed for almost an hour-and-a-half by thunderstorms.

“Good job, bud, take care of your ride there,” Elliott’s crew chief, Alan Gustafson, told him when he completed his lap.

“It was really good, a little better than we expected,” Elliott said of his first round performance. “That’s always nice. We’ll see. Speed in our Chevy has been good and we’ll have a good starting spot tomorrow night.”

Also advancing to the final round were Stenhouse, Newman, McDowell, Bowyer, Blaney, Logano and Austin Dillon.

“Nice work everybody, good job, that’s what I’m talking about, execution,” McDowell said over his radio and completing his lap.

His crew chief, Derrick Finley, replied, “Let’s cool it down, do what the big boys do.”

“That sucks,” Wallace said after his run. “All right, we’ll go race.”

Said Truex: “You never know what you’re going to get here. Not much practice yesterday, just kind of winged it, but 13th will be an okay spot.”

Timothy Peters was the only driver who failed to make the field. He was slowest among the five drivers who were not locked in the field and attempting to claim one of four “open” positions.