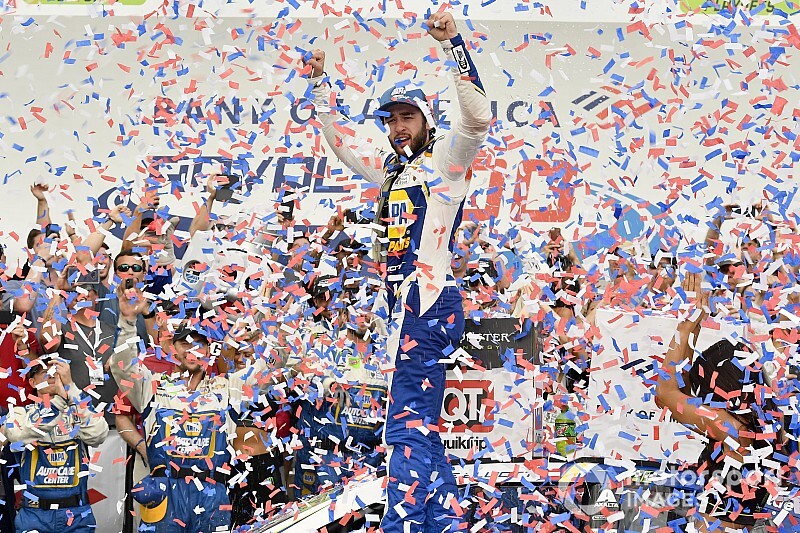 At one point, Chase Elliott drove straight into a wall but still ended up in Victory Lane at the Charlotte Roval.

Elliott missed the entrance to Turn 1 on Lap 65 of 109 but came back to hold off Hendrick Motorsports teammate Alex Bowman to win Sunday’s Bank of America 400 on the Roval course at Charlotte Motor Speedway.

After taking the checkered flag, Elliott drove his No. 9 Chevrolet to the spot on the Turn 1 wall where he hit earlier and did a celebratory burnout.

"Yeah, Holy Moly! I couldn't believe I did that. I mean that was just so stupid," Elliott said of his wrecking in Turn 1 while leading the race. "I don't know if you could have anything more stupid leading this race than what I did right there.

"Obviously, I was just really pissed off and luckily our car wasn't too bad. Our NAPA Camaro was fast enough to drive back up through there and got the caution at the right time. Just didn't quit. If there was every a lesson to not quit, today was the big answer.

"The biggest thing is we got six more bonus points to continue forward with. The win's awesome - it doesn't get any better than that. There's no feeling like winning one of these races.

The win is Elliott’s third of the 2019 NASCAR Cup Series season and second on a road course this year. He now has six career wins, all in the last two seasons.

Following the break between Stages 2 and 3, most of the lead-lap cars remained on the track with Elliott the leader.

On the restart on Lap 55, Elliott was followed by Keselowski, Johnson, Harvick and Truex.

With 50 laps left in the race, Elliott’s lead over Keselowski had grown to 3.6 seconds with Johnson close behind in third. Harvick ran fourth and Truex fifth.

Daniel Hemric wrecked after exiting the backstretch chicane on Lap 61 to bring out a caution. Most of the lead-lap cars remained on the track.

On the restart on Lap 65, Elliott remained out front followed by Keselowski, Harvick, Johnson and Truex.

On the restart, Elliot locked up his brakes and drove straight into the Turn 1 tire barrier, which immediately brought out a caution and allowed Harvick to move into the lead.

When the race returned to green on Lap 67, Harvick led the way followed by Keselowski, Truex, Johnson and Menard.

Kyle Busch and Larson made contact on the restart, which left Busch with a flat left-front tire and he had to limp around the track and back to pit road.

By Lap 68, Truex had moved into second and began pressuring Harvick for the lead.

Byron got around Keselowski and moved to the third position on Lap 74 just as the pit window opened for drivers to make the final stop for fuel.

Harvick and Truex elected to pit on Lap 77, which turned the lead over to Byron. Byron pit on Lap 78, turning the lead back over to Elliott.

Elliott made his final stop on Lap 79, leaving Hemric in the lead ahead of Harvick although Hemric still needed to make one more stop.

Harvick passed Hemric to retake the lead exiting the infield course on Lap 81.

With 25 laps to go, Harvick had built a 6-second lead over Hemric as Truex ran third. Byron was fourth and Austin Dillon fifth.

On Lap 87, Byron moved into the third spot, 10 seconds behind leader Harvick.

Ricky Stenhouse Jr. spun and wrecked through the backstretch chicane on Lap 89 to bring out a caution.

Several teams elected to pit under the caution but Harvick stayed out and remained in the lead when the race returned to green on Lap 92. He was followed by Truex, Byron and Elliott.

On Lap 93, Newman, Hamlin and Ryan Preece got together while running through Turn 6, with several cars driving into the infield grass.

Harvick continued to lead on the restart on Lap 95, followed by Truex, Bowyer, Byron and Elliott.

Daniel Suarez got spun out in Turn 6 on Lap 96 and could not get re-fired, which brought out another caution. Harvick continued to lead on the restart on Lap 99.

Chris Buescher spun in Turn 8 in an incident that also involved Kurt Busch and Newman to bring out the 10th caution of the race. The race was red-flagged for nearly 10 minutes while the track crews cleaned Turns 7 and 8 of fluid.

Under the red-flag, Kyle Busch drove his No. 18 Toyota to the garage. He was already three laps down and had run over another car’s axle. He already locked into the next round of the playoffs.

Harvick remained out front on the restart on Lap 104.

Elliott got around Truex in Turn 3 to take the second position. He powered past Harvick entering the frontstretch chicane to retake the lead.

Bowman got around Harvick for the second position on Lap 105.

On Lap 108, Newman missed the backstretch chicane and was forced to serve a stop-and-go penalty, which took him out of contention for a playoff spot.