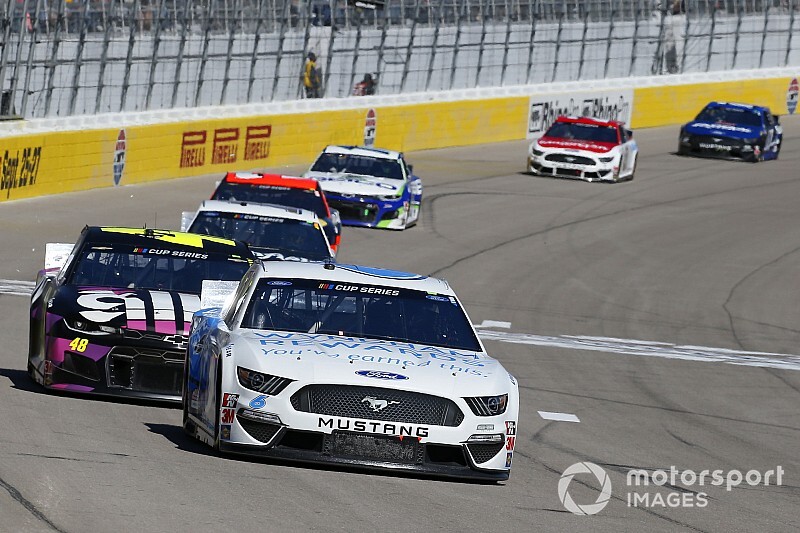 In his first race as Ryan Newman’s replacement, Ross Chastain found himself with a fast car but was disappointed he was unable to capitalize on it.

Chastain had shown speed all weekend in Roush Fenway Racing’s No. 6 Ford and found himself running in the top-10 in much of Sunday’s race at Las Vegas Motor Speedway, including finishing 10th in the first stage.

Late in the race, Chastain was running a lap down after an unscheduled pit stop, but battling to earn the free pass position. With six of 267 laps remaining, Chastain spun out in the middle of Turns 1 and 2, bringing out the final caution of the race.

He ended up posting a 27th-place finish.

“I was just overdriving there at the end for sure. It just got away from me there and got loose. There were a lot of small mistakes on my end, but I learned a ton,” Chastain said.

“The car deserved a lot better finish. Obviously, we showed that early and I just didn’t have great restarts. These guys kind of ate me alive on the restarts and I’d lose three or four spots every time and picked the wrong lines through (Turns) 1 and 2, and then (Turns) 3 and 4 again.

“I just kept making silly mistakes that I should learn from after I make the mistake once. I just have to be better.”

Chastain took full responsibility for not being able to produce a good run on Sunday.

“Just a lot of mistakes on my end and then at the end just overdriving and for one position to be the first car a lap down, coming to less than 10 laps to go in a Cup race and I spin out in the middle of (Turns) 1 and 2. That’s unacceptable,” he said.

“RFR and everybody puts so much into these cars and ultimately I’m the one holding the wheel. We had such a good first stage and had so much confidence and from there I just started making mistakes.”

Earlier Sunday, RFR president Steve Newmark said Chastain would remain as driver of the No. 6 until Newman is cleared for competition.