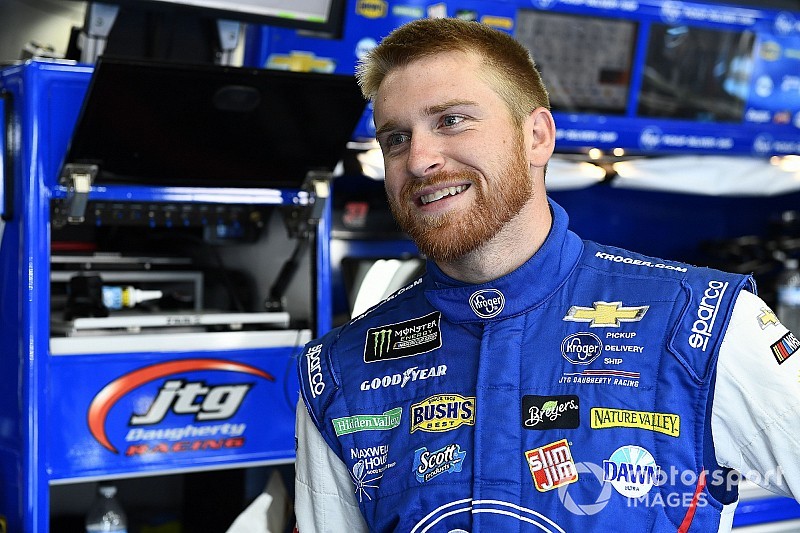 After hitting wall and losing a lap early in the Coca-Cola 600, Chris Buescher rebounded for his best finish of the season.

There is no giving up in Chris Buecher or his No. 37 Chevrolet and he proved that Sunday in the longest race of the season.

Buescher cut a tire and hit the wall on Lap 128 of 400, falling a lap down but rebounded to finish sixth for JTG Daugherty Racing. It’s Buescher’s second consecutive top-10 finish - the first time he’s done that in his Monster Energy NASCAR Cup Series career.

“I end up sixth; what a great night for us,” said Buescher. “Our Kroger Thrill of the Grill Camaro ZL1 had great speed from the drop of the green. The second stage we just tried to get it up a little too high and I got up in the fence.

“I cut a tire down later and lost a lap. We knew we had speed still, but this group did a terrific job of repairing it.”

Buescher qualified 22nd in the 40-car field and credited his team with making adjustments to his car throughout the weekend to find more speed.

“We worked really hard after practice making a lot of changes,” he said. “It was just a great effort all around; the pit crew did a terrific job. We were able to come out there at the end and get an awesome finish.”

What makes the finish even sweeter was Buescher thought after his accident there was no way he would be able to secure a good finish.

“We hit pretty hard,” said Buescher on his Lap 128 cut tire and contact with the outside wall. “I thought it was going to hurt us for sure. Felt like it knocked a lot of camber into. After we repaired it, we kept digging.”

He was happy to have fun in the 600 and survive the wild final restart.

“I got run into three times, run into the fence and nobody lifted, “ said Buescher describing those final five laps of the race. “Honestly it’s kind of what we expected in a lot of  these races this year and it was hot and slick enough for that to happen. Wild racing that makes it frustrating at times but you had options to move around.

“We had speed in the car and were able to make up that lap We have to keep improving a little bit, but it was a pretty awesome night.”

Corey LaJoie impresses in Coke 600: “It was a hell of a day”