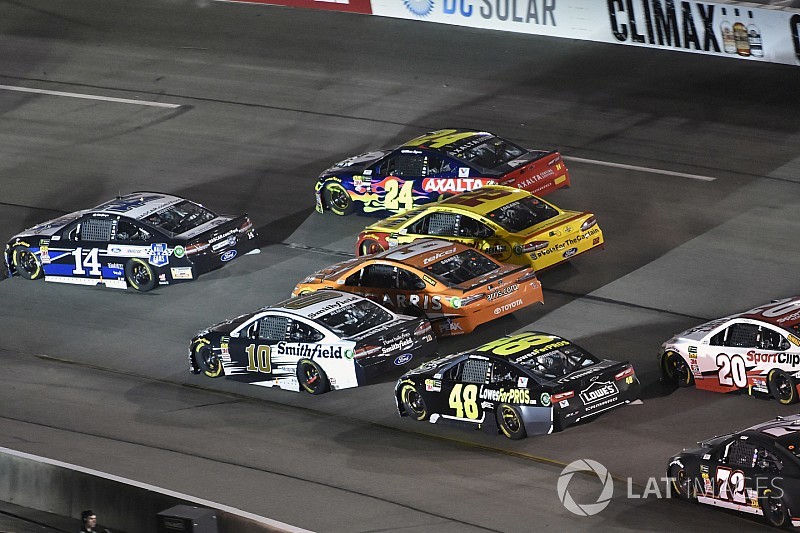 For a while Saturday night, it looked like Clint Bowyer was heading to his second short track win of the NASCAR season.

That was until, as he said, “all hell breaks loose.”

An incident-free race turned chaotic in the final 45 laps of the Toyota Owners 400 at Richmond (Va.) Raceway, with four cautions including an overtime period before Kyle Busch escaped with the win over Chase Elliott.

Bowyer, who led 45 laps in the race, was running second with 50 to go in the race but got caught up in the beating and banging during the multiple restarts at the end and wound up with a ninth-place finish.

“We had a really good car, it’s just frustrating there at the end. All hell breaks loose,” Bowyer said after the race. “We lost a couple of spots on pit road and that gets you back and then you get on the outside and get stuck behind somebody that spun their tires and you knock the front fender in on (William Byron) because he spun his tires.

“The next thing you know you’re 10th thinking, ‘Boy, how did this night go to ruin so fast?’ Then it’s just beating and banging and everybody dive-bombing on the bottom.”

Struggling on the short run

Bowyer performed so well during the first three-fourths of the race in large part because of the long green-flag runs. His No. 14 Stewart-Haas Racing Ford was exceptional over the long haul, but not nearly as good on short runs.

The multiple cautions and restarts at the left him struggling.

“It’s a shame that a good, positive night ends up being like that, but that’s racing at this place.  If we could have maintained that top two or three, I think we could have stayed up there,” he said.

“All night long those guys could take off, even Kurt (Busch) my teammate could take off better than I could, but I’d run him down and drive off.”

Until the finish, Bowyer had probably his most complete race of the season going. He finished fifth in Stage 1 and second in Stage 2, getting passed by Joey Logano with five laps remaining in the segment.

Bowyer now has fourth consecutive top-10 finishes heading into next weekend’s race at Talladega (Ala.) Superspeedway. He moved up one spot to third in the Monster Energy NASCAR Cup Series standings, 86 points behind leader Kyle Busch.

“I was really looking forward to that race with (Martin Truex Jr., Kevin Harvick) and I. I thought that was shaping up to be a fun race and I thought it was going to be good for everybody,” he said.

“Unfortunately a caution came out. It was due. It hadn’t come out all night and it finally did.”

William Byron: "I'm starting to really figure out what I need"