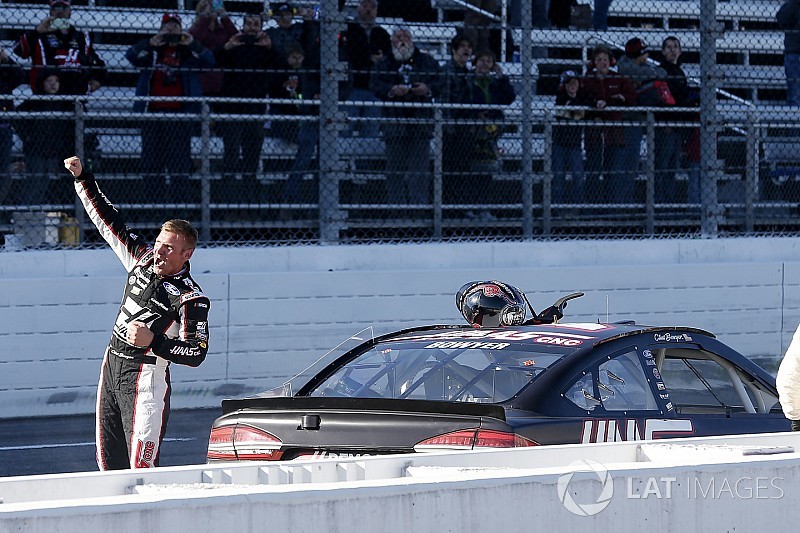 Stewart-Haas Racing is celebrating its 10th anniversary this year and will make its 1,000th start in Monster Energy NASCAR Cup Series competition this weekend at Texas Motor Speedway.

“That makes me feel really, really old,” SHR competition director Greg Zipadelli said. “Seriously, a thousand starts is a sign of longevity and that’s an accomplishment. It helps in keeping good people and recruiting good people.”

Since its inception, 14 different drivers have made at least one Cup start with SHR but Clint Bowyer’s victory at Martinsville (Va.) Speedway last month made him just one of five who have won with the organization.

“That’s pretty good company,” said Bowyer. “Gene Haas and Tony Stewart and all their partners and employees have shown a lot of faith in me. It was so great to be able to celebrate with them in Victory Lane.”

Bowyer’s win couldn’t have come at a better time for himself – ending a 190-race winless streak – but also for SHR, which is in the best position the organization has ever been.

In 2018, SHR Fords have led 723 of a possible 1,811 laps and won four of the first six races. All four current SHR drivers – Harvick, Bowyer, Busch and Aric Almirola – are in the top-11 in the series standings.

“Make no mistake, all four Stewart-Haas cars have been good all year long,” Bowyer said. “Kevin led that charge when he won three races in a row, but we’ve been ‘Steady Eddie’ with our No. 14 car and the things that I’ve always been accustomed to.

“Consistency and things like that I’m starting to see, knowing our strengths, knowing our weaknesses from last year, focusing on those weaknesses and then, all of a sudden, it starts to click in and putting things together, and you have those conversations.

“You feel the confidence.”

Texas Motor Speedway offers another solid chance for SHR to extend its strong start to the 2018 season.

Bowyer has yet to win at Texas in his Cup career, but with the confidence coming off his first win of the year, anything is possible.

“We’ve been close there a number of times over the years. At Texas, it’s all about having the sheer speed,” he said. “On those 1.5-mile tracks, you have to have a car that unloads fast.

“You can be a little bit tight or a little bit loose but, if that car isn’t making grip, making downforce and having the speed on the race track, then you are going to struggle. Unloading a fast hot rod right off the truck is going to be so important.

“Normally, you can tell in the first few minutes of practice who will be good in the race.”