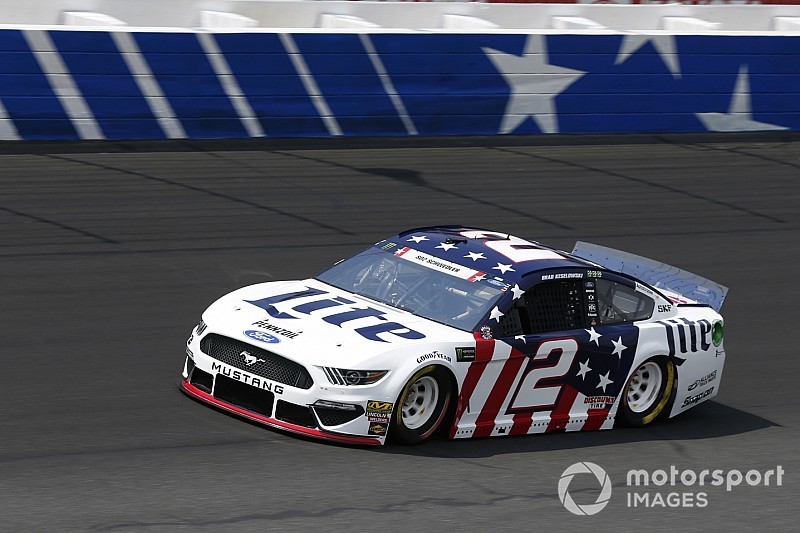 Brad Keselowski held off a late charge from Denny Hamlin to earn the Stage 1 victory at Charlotte Motor Speedway.

Keselowski powered to the lead past Kevin Harvick on a restart with five of 100 laps remaining in the stage then fended off a late challenge from Hamlin.

William Byron, who started on the pole, moved out to about a half-second lead over Almirola after the first 10 laps.

On Lap 11, Harvick got around Aric Almirola to move into the runner-up position.

After 20 laps, Byron had moved out to more than a 1-second lead as Kyle Busch got around Harvick and moved into the second position.

On Lap 23, Erik Jones slammed the wall exiting on Turn 4 to bring out a caution which did extensive damage to his No. 20 Toyota. “We just blew a right-front. There was no real warning. It’s unfortunate,” Jones said. “We had a pretty good car.”

All of the lead-lap cars elected to pit with Kyle Busch the first off pit road. Larson made a second trip down pit road for repairs after hitting the wall. On the restart on Lap 28, Busch was followed by Austin Dillon, Byron and Harvick.

Harvick went to the side of Kyle Busch to grab the lead in Turn 1 of Lap 32, only to see Kyle Busch return the favor by the time the duo exited Turn 3.

Matt DiBenedetto hit the wall on Lap 49 to bring out another caution, apparently after having a tire going down.

All of the lead-lap cars pit with Harvick the first off pit road and took over the lead when the race returned to green on Lap 55. He was followed by Kyle Busch and Byron.

Elliott was penalized by NASCAR for speeding on pit road during his stop and had to restart from the rear of the field. Aric Almirola also had to restart in the rear after a penalty for an uncontrolled tire.

Kyle Busch powered back into the lead on the restart as Harvick settled in the runner-up spot.

Harvick got around Busch off Turn 4 to retake the lead on Lap 59. Truex followed Harvick and moved into the second spot.

Truex went to the inside of Harvick in Turn 3 and grabbed the lead for the first time on Lap 63.

With 30 laps to go in the first stage, Truex had moved out to almost a 2-second lead over Harvick. Kyle Busch was third, Keselowski fourth and Byron fifth.

On Lap 74, Truex slammed into the wall in Turn 4 after having a right-front tire going down to bring out a caution and handing the lead back to Harvick.

Most of the lead-lap cars elected to pit with Harvick again the first car off pit road. Daniel Hemric was among those who stayed out and took over the lead on the restart on Lap 79.

With 20 to go, Hemric remained in the lead with Keselowski fighting hard in second. Keselowski finally got around Hemric for the top spot on the following lap.

Ricky Stenhouse Jr. spun off Turn 4 following contact with Kyle Busch with 15 laps remaining in the stage. Most drivers elected not to pit and Keselowski led the way on the restart on Lap 91. He was followed by Harvick, Hamlin and Elliott.

Hemric got into the wall as the field exited Turn 4 which brought out another caution. Harvick had moved into the lead on the same lap and remained out front when the race returned to green on Lap 96.

Keselowski powered into the lead on the restart with Harvick dropping into second.

Matt Tifft had to start the race from the rear of the field and had a crew member ejected from the race after his No. 36 Ford twice failed pre-race inspection.