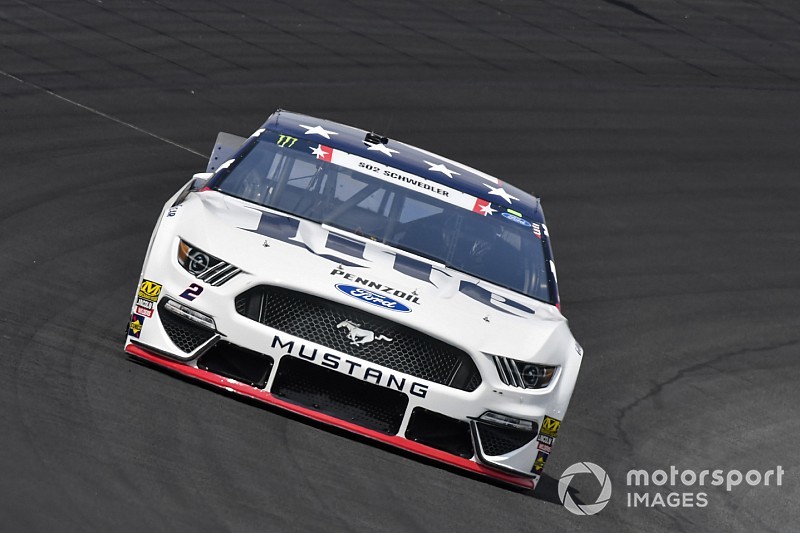 Brad Keselowski passed Alex Bowman with two of 100 laps remaining and held on to take the Stage 2 victory at Charlotte Motor Speedway.

Keselowski restarted 14th with seven laps remaining in the stage on new tires and diced his way through the field to claim his second consecutive stage in Sunday’s Coca-Cola 600.

Following the break between Stages 1 and 2, several cars elected not to pit, including Keselowski, who remained the leader when the race returned to green on Lap 108.

Denny Hamlin powered to the lead on the restart as Kevin Harvick followed to take second.

By Lap 125, Hamlin had moved out to a 1.2-second lead over Harvick. Keselowski was third, Jimmie Johnson fourth and Elliott ran fifth.

On Lap 127, Chris Buescher slammed into the Turn 4 wall to bring out a caution. Buescher had tagged the wall early in the stage.

Most of the lead-lap cars elected to pit and Keselowski was the first off pit road. On the restart on Lap 132, Elliott – the first of seven who stayed out – led the way followed by Martin Truex Jr. and Joey Logano.

Clint Bowyer was penalized for speeding on pit road and had to restart the race from the rear of the field.

Ryan Blaney ran down Elliott on the backstretch to take the lead for the first time exiting Turn 4 on the restart lap.

One lap later, Keselowski got around Blaney to retake the lead.

After 150 laps, Logano made a green-flag pit stop. He was running 25th and struggled much of the race.

Daniel Suarez followed down pit road on Lap 157 as many of the drivers who stayed out between Stages 1 and 2 elected to make stops under green.

Hamlin had a tire go down on Lap 162 which sent his No. 11 Toyota into the Turn 2 wall and brought out a caution.

All of the lead-lap cars elected to pit under the caution with Byron the first off pit road. On the restart on Lap 167, Byron was followed by Keselowski, Harvick and Johnson.

Keselowski made his way around Byron off Turn 4 to retake the lead on Lap 168.

With 20 laps remaining in the second stage, Keselowski maintained a small lead over Blaney. Bowman was third, Byron fourth and Elliott ran fifth.

On Lap 189, Ryan Preece hit the Turn 2 wall to bring out another caution. Many of the lead-lap cars elected to pit but Bowman was among those who stayed out and took over the lead.

On the restart on Lap 194, Bowman was followed by Byron, Larson, Kurt Busch and Ricky Stenhouse Jr. Keselowski, who was first off pit road among those who pit, lined up 14th.

With four laps remaining in the stage, Keselowski had sliced through the field up to the runner-up position.

With two laps to go, Keselowski went inside of Bowman entering Turn 1 to return to the top spot.