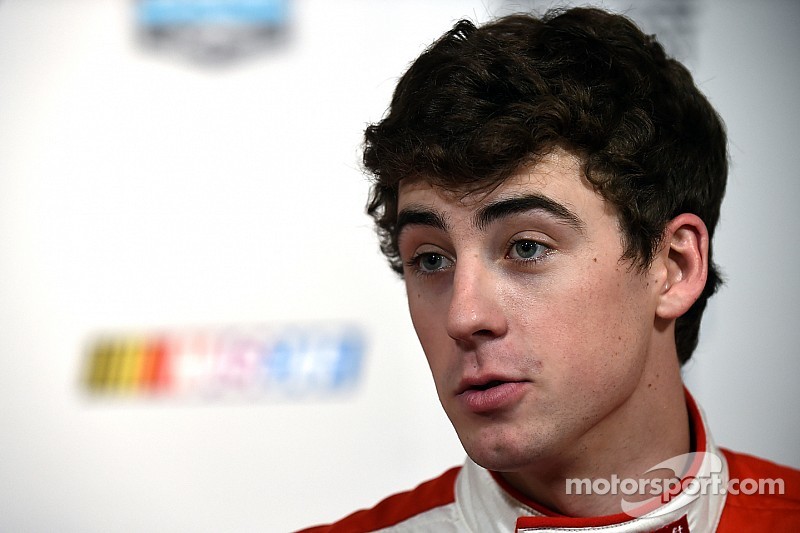 Ryan Blaney is grateful for his opportunity with the Wood Brothers.

TALLADEGA, ALA. - Just days after his 20th birthday and in just his second career Sprint Cup start, Trevor Bayne piloted the venerable No. 21 Wood Brothers Ford to the checkered flag for the 2011 Daytona 500.

For the oldest — and one of the most revered teams in NASCAR — it marked the Stuart, Virginia-based family’s 98th Cup win.

Fast forward to 2015. The Wood Brothers have another 20-something racer behind the wheel at another restrictor plate track. Ryan Blaney, 21, a third-generation driver heralded as one of the promising talents in the sport, is hoping to make his own history this weekend.

Blaney started on a high note for his sixth Cup race. He qualified third — the top Ford and his best start to date for Sunday’s Geico 500.

“We’ve got good speed,” Blaney said. “That’s cool. We’ve got pretty good speed in our Ford and it’s just nice to be back with this Wood Brothers team.  To have Motorcraft and Quick Lane back on the race track is really cool, so I’ve definitely been itching to get back to the track and it’s cool to finally be back here and have a good car, too.

“We’ve got a good starting spot and hopefully we’ll be able to run all the laps tomorrow and not have any issues and stay out of trouble.  This team really needs a good finish.  After having a good car at Texas and blowing up early that really kind of brought us down, so we’ll try to run all the laps (Sunday) and see if we can pick this team up a little bit before Charlotte.”

Coming off of two full seasons in the Camping World Truck Series, where he's won a race in each of the last three years and finished second in the standings last year and sixth the season before, it's been a steady transition for Blaney on the Cup tour.

While it’s difficult to gain momentum running a limited schedule, Blaney performed admirably under similar conditions on the XFINITY tour with two win in 30 starts over a three-year period. It's been no different for Blaney since joining the Wood Brothers. The Team Penske protege has an average qualifying effort of 14.5 but his progress during the race has been hampered by engine failures at Daytona and Texas — neither which was driver related.

Even at places he’s never run before, he goes out, runs that first lap and he’s immediately up to speed. He’s where he needs to be — and that’s the sign of a good one.

“It was just stuff that happened,” team owner Eddie Wood told motorsport.com. “With us, it probably shows up worse because we’ve only run three races. But it doesn’t seem to bother Ryan. He just rolls with it. He’s just that kind of kid.

“Even at places he’s never run before, he goes out, runs that first lap and he’s immediately up to speed. He’s where he needs to be — and that’s the sign of a good one.”

Wood is grateful for the opportunity to share a technical alliance with Team Penske this season. There’s no concern of getting up to speed throughout practices. When the car is unloaded from the transporter on Friday, it’s already fast.

Still, it’s a group effort and Blaney is the beneficiary. On Saturday, he out-qualifying his more experienced teammates Brad Keselowski and Joey Logano, who will start 15th and 21st, respectively.

“I’m pretty happy with the speed compared to our teammates,” Blaney said. “We had a lot more speed than they did.  Everyone at the Wood Brothers team did a great job and it’s nice to be back at the race track, especially after a bad weekend at Texas, blowing up on like lap 18.  It’s nice to be back and know we have some good speed.

“You can’t really carry much of that over into the race, but at least you get a good starting spot, good pit stall and you’ve got stuff to look forward to.  We’ll try to stay out of trouble. I think that’s gonna be the big thing for us is trying to run all the laps because we’ve blown up in two or three races this year and it’s gonna be big for this team just to finish a race and run everything.  I think we’ve got a good car and we’ll see where it brings us.”

Sunday marks Blaney’s second start on the 2.66-mile track where he qualified fourth last fall in just his second start, led 15 laps and finished 22nd.  He’ll roll off alongside Dale Earnhardt Jr. and behind Jeff Gordon and Kasey Kahne.

But after growing up at and around racetracks, Blaney feels no pressure. Nor does he feel the weight of Bayne’s early success with the Wood Brothers hanging over his head. Blaney’s just happy to be back in a race car doing what he loves best.

We’re just out here having a good time and we’re just glad to be here and glad to be racing.

“I’ve been really fortunate and lucky to be with a great organization like the Wood Brothers and bring them over to Team Penske and be able to share their resources and their information,” Blaney said. “There’s no pressure.  We’re just out here having a good time and we’re just glad to be here and glad to be racing.

“You know you’re gonna get shuffled to the back at least once or twice during the race and you’ve just got to find a way to work your way back up through there. It definitely doesn’t hurt to start up front and get a good pit stall and everything like that.  It’s not bad, but we’re just gonna focus on running all the laps.”

Talladega, a race of opportunity for the underdogs of NASCAR