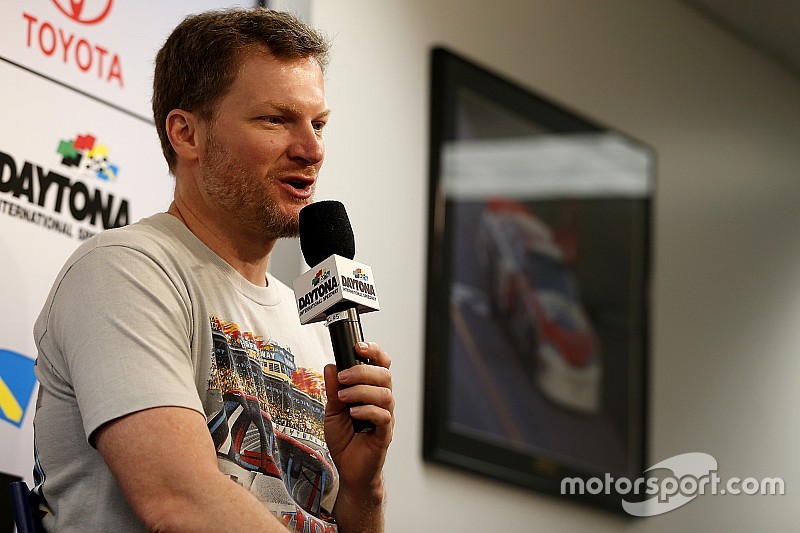 Dale Earnhardt Jr. was filled with mixed emotions as he made his return to the race track Friday, the first time since he and his family survived a fiery plane crash earlier this month in Tennessee.

“It was a very scary experience and we’re just happy to be healthy and have a weekend like this to look forward to and trying to get back to doing my job as a broadcaster for NBC and all the things we’re excited about in our lives and ready to focus on other things,” Earnhardt said Friday at Darlington (S.C.) Raceway.

“It’s good to be doing something normal. We’ve been taking some time to ourselves. Things have been very good. My wife loves to be at the races when I’m driving, so her and Isla are going to come and be here. That’ll be great.

On the afternoon of Aug. 15, a plane carrying Earnhardt, his wife Amy, their daughter Isla, a family dog and two pilots ran off the end of the runway at Elizabethton (Tenn.) Municipal Airport, slammed into a fence and burst into flames.

Earnhardt was the only passenger taken to a local hospital but was released several hours later. The National Transportation and Safety Board is still investigating the cause of the crash.

Earnhardt had long been scheduled to compete in Saturday’s Xfinity Series race at Darlington – this is the second consecutive season since his retirement from fulltime competition that he has driven one Xfinity race with his JR Motorsports team.

Earnhardt’s No. 8 Chevrolet is adorned with a paint scheme that honors his late father, Dale Earnhardt as part of this weekend’s “Throwback Weekend.” The livery is inspired by a paint scheme Dale Sr. ran for his first Cup Series start, the 1975 World 600 at Charlotte Motor Speedway.

Earnhardt suffered bruising and swelling to his lower back but said “he feels great” and wouldn’t compete in this weekend’s race if was any danger of causing long term injury to himself.

Earnhardt said he “doesn’t have any problem with flying again” but admitted the plane crash “was a very tough experience to go through.”

“I try not to think about that too much. Things happen for a reason. You just try to learn from it and move on,” he said. “I love my daughter so much and enjoy being around here and look forward to watching her grow up and experience a lot of things with her going forward.

“That just made me realize that much more. I’m just thankful and ready to live our lives.”

Getting ready for his return

Even without the plane incident, Earnhardt said his lone start in a NASCAR race this weekend would produce pressure.

“I wasn’t sure (if I’d be able to drive) but my back healed really quickly,” he said. “I drove a two-seater yesterday for an hour-and-half and didn’t have one issue. And that seat wasn’t even my seat. I just felt getting back to the track and hitting everything ‘head on’ was the best approach.

“I just don’t want to let anybody down. I don’t want to underperform. I like to come into these races that I do at this point in my career just to have fun – smell the smells, hear the sounds, just enjoy racing somebody, whether it’s for first or last,” he said.

“That’s really the focus for me right now – is to make sure I’m having fun. I don’t need to make it more difficult than it needs to be.”

Earnhardt said if the sponsorship situation works out, he said he might like to run the Xfinity Series race at Homestead-Miami Speedway next year. After a shuffle of race dates, the Homestead races will move to mid-March in 2020.