Dale Earnhardt Jr. remembers his father on his 65th birthday

There are several pictures of the late Dale Earnhardt strategically placed around the media center at Talladega Motor Speedway. 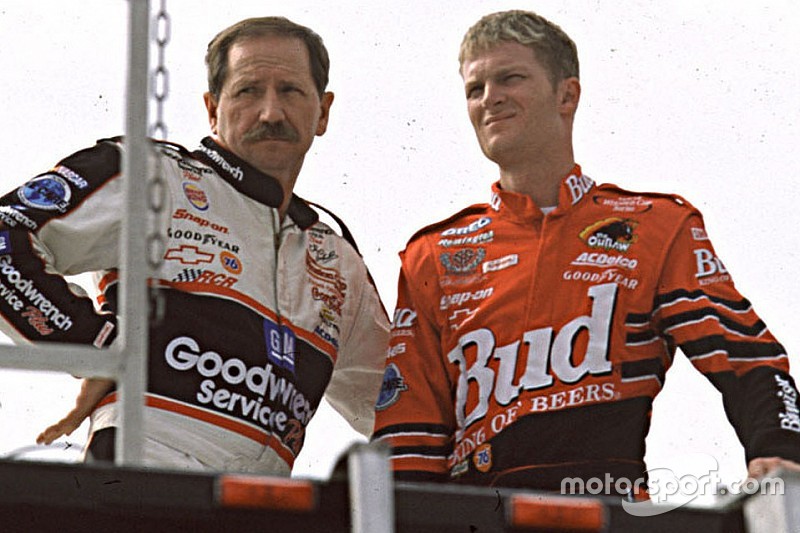 From the mid-80s on, this has been an Earnhardt track.

There’s a picture in the hall from 1983 of Senior with Bud Moore celebrating Earnhardt's first win on the 2.66-mile track in a Ford. His move to Chevrolet came one year later. Earnhardt drove the yellow-and-blue Wrangler Jeans car for Richard Childress until 1988, when Earnhardt transitioned to the hallmark black No. 3 Goodwrench Chevy. He and Childress won nine Talladega races together.

Everybody still acknowledges who he was and what he meant. That’s all I care about, that we never forget just the impact that he had cause

After his 10th-career victory at Talladega — the 76th and final win of his career — Earnhardt was still beaming days later at a Nabisco press conference at Dale Earnhardt Inc. Unlike fellow competitor Mark Martin, the driver of the No. 3 would have never wondered publicly whether each win would be his last.

On the other side of the Talladega media center is another photo of Earnhardt from later in his career, with clear goggles and an open-face helmet with Goodwrench printed across the top. Forget putting a full-face helmet on the Intimidator. He didn’t want it to affect the feel of the air — particularly at restrictor-plate tracks such as Talladega and Daytona.

It’s unlikely that Dale Earnhardt, who was just two month shy of 50 when he passed away in a last lap crash in the Daytona 500, would be much different, had he lived to be 65, the birthday he would have celebrated on Friday.

Dale Earnhardt Jr., who has continued the family tradition with six Talladega victories of his own, acknowledged he, too, wonders what his father would have been like in his golden years.

“One of the best things about it — and I’ve said it before — it’s great that people still talk about him. That the sport, his fans, the media, that everybody still acknowledges who he was and what he meant.

“That’s all I care about, that we never forget just the impact that he had cause I felt like he had so much influence — definitely in the top five, top three people that influenced the sport as a whole as much as Bill (France) Sr. and guys like that. I put him right up there with people that really changed the sport.

“It’s so awesome to see him get that appreciation and recognition after all these years. Hopefully, that’s something that never changes. On his birthday, and days like this, I’m reminded of that appreciation that everyone has for him.”

Chase Elliott puts No. 24 on pole at Talladega

Dale Jr. hopes to 'stay out of trouble' in virtual IndyCar race