All eyes on Darlington as NASCAR's return looms

Darlington (S.C.) Raceway has been an iconic part of NASCAR’s history and it’s poised to play another very important role.

Darlington, NASCAR’s first superspeedway when it opened in 1950, has provided numerous highlights featuring some of the sport’s most successful drivers over the last seven decades.

It has an even bigger responsibility over the next four days – beginning Sunday, the track will host NASCAR’s first three live races since March 8 at Phoenix Raceway.

The week following Phoenix, the outbreak of COVID-19 forced all live professional sports to come to a screeching halt. President Donald Trump declared a national emergency and a slew of state and local governments began implementing stay-at-home orders to help prevent the spread of the disease.

There are going to be a lot of people who want to watch to see how this all plays out. They want to see live sports again. We want to put on a great show and a safe show

With the relaxation of those orders in North and South Carolina, NASCAR is set to run seven races without fans over the span of 11 days at Darlington (two Cup events and one Xfinity event) and Charlotte Motor Speedway (two Cup, one Xfinity and one Truck event).

NASCAR will be the first major professional sport to return to live national television since the pandemic engulfed the United States with Sunday’s The Real Heroes 400 (3:30 p.m. ET, Fox Sports).

The spotlight is on Darlington

Not since 2004 has Darlington hosted more than one Cup Series event in a season. It will now host two within a week and a record third later this year, with its originally scheduled Labor Day weekend Southern 500 event still on the calendar.

“But with that opportunity comes responsibility. It’s a big responsibility to be the first out of the gate. We have to get this right.”

“We realize up front it’s a huge responsibility for us as a sport. But I’m also confident in the group we’ve gathered to put this plan together,” he said. “Our entire industry has come together to believe in the plan we’ve put together.

“We’re certainly going to learn as we go. But the process we put in place I think gives the industry the confidence that we can be first, we can do this in Darlington.”

While the actual competition on the track should not look much different than what race fans are accustomed to seeing, everything else surrounding the operation of the event will be a venture into new territory.

Sunday’s race will be held without fans in attendance, with social distancing guidelines in effect among all the participants, medical screenings before and after the event and a condensed schedule compacted into just one day.

The Fox broadcasters calling the race will operate from a studio in Charlotte and the network will have just one pit reporter on site. The independent media contingent has been reduced to four members operating from the press box and there will be only three photographers at the track (two with Getty Images/NASCAR and one provided by the Associated Press).

Team rosters have been reduced and teams will kept apart from each other (even if with the same organization) to help reduce incidents of virus exposure and assist with contact tracing (if necessary). 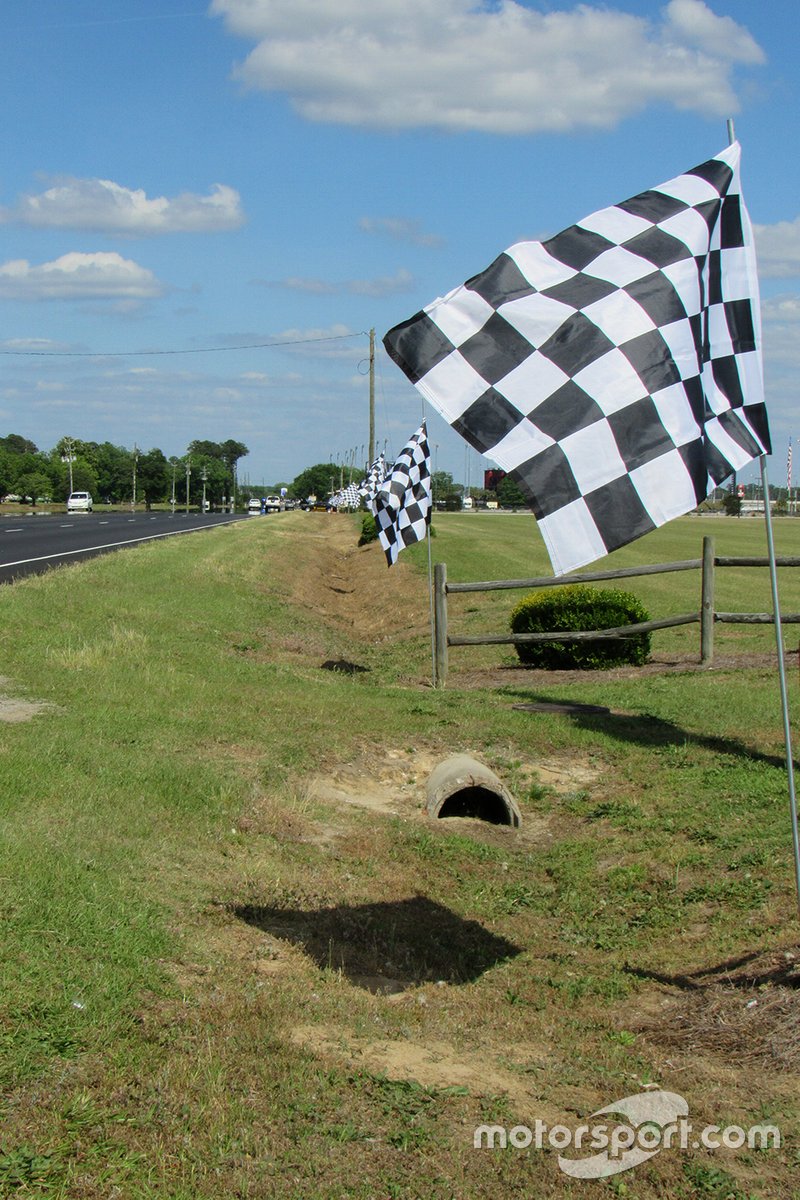 “We continue to be in conversations with public health officials in South Carolina and North Carolina,” said John Bobo, NASCAR’s vice president of racing operations. “We realize that as we are guests in each community, as we prepare for these events, we’re going to keep a close eye on the trends as they develop, knowing our plans can be contingent on those events pandemic-related.

While the track has been preparing for the sport’s re-opening for weeks now, the first public indication of upcoming competition came Saturday evening when the haulers transporting Cup Series teams’ cars began entering the track to set up.

It was the only sign of a “normal” race weekend that in actuality will be anything but. 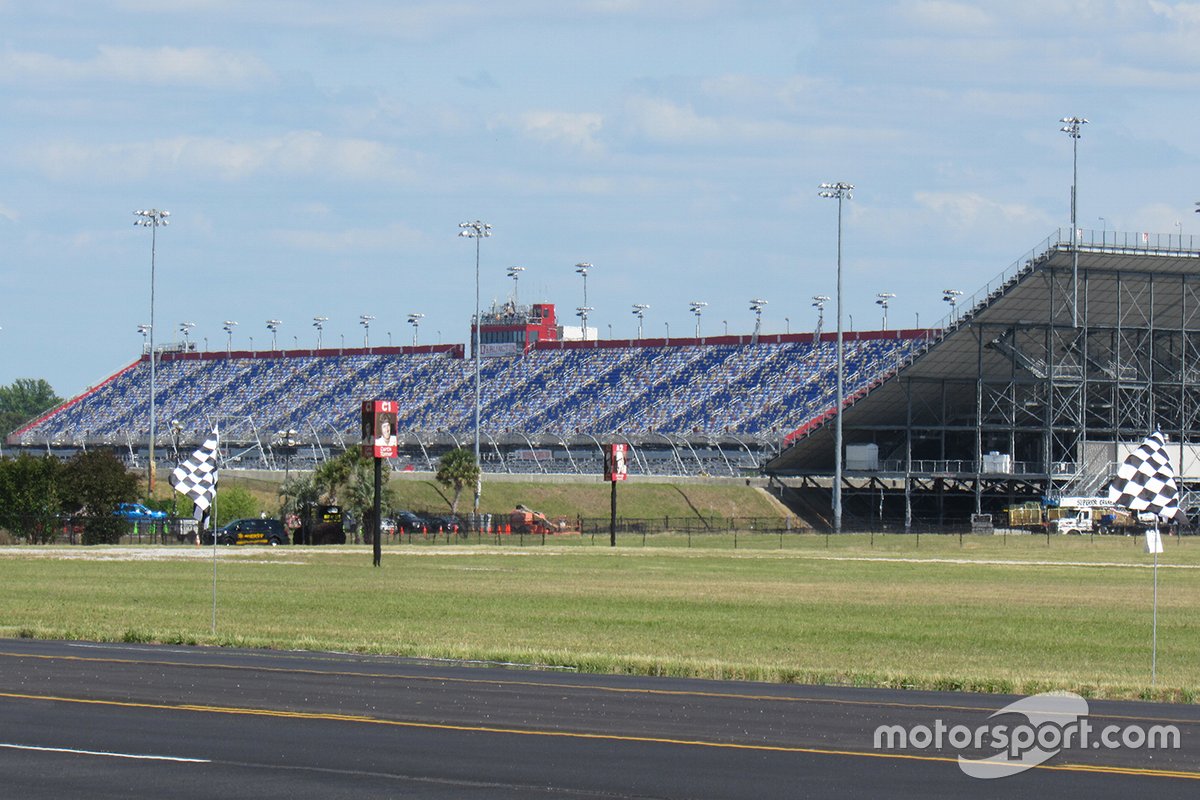 Typically, race weekends at any track are preceded for weeks by numerous news conferences and promotional activities in the surrounding the area to entice fans to purchase tickets.

The extent of the marketing activities for NASCAR’s return this weekend has been constant reminders of Fox and Fox Sports 1’s broadcast schedule on TV, which will be the primary way fans will be able to follow the action.

Tharp said there do remain some preparations common to a “normal” race weekend.

“We have to get the property ready. There’s the track surface, there’s getting the fire and safety crews in order and then the corporate signage and branding you have to take care of,” he said. “You have to paint the walls, you have to still cut the grass.

“But I can tell you preparing for a race without fans is very, very different.” 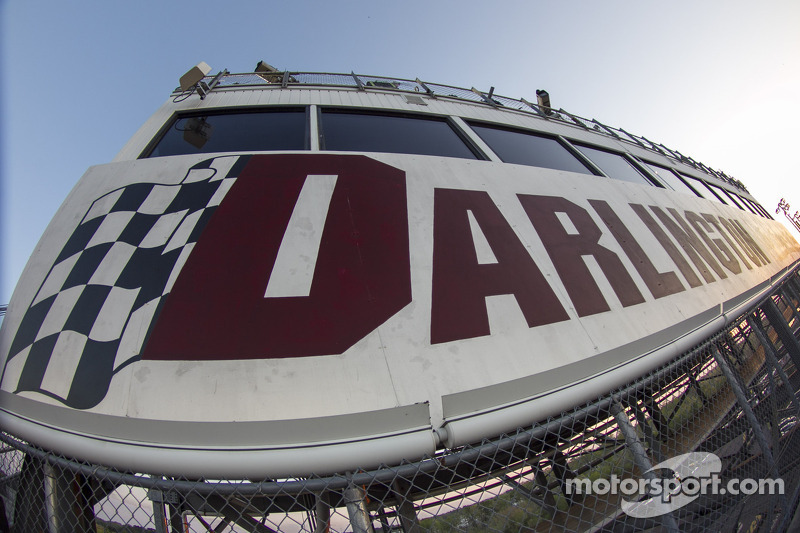 With NASCAR basically having the live sports broadcast window to itself for a while, the hope is not only will race fans tune in with big numbers but also sports fans in general, who may be starved for entertainment during the pandemic.

“There are going to be a lot of people who want to watch to see how this all plays out,” Tharp said. “They want to see live sports again. We want to put on a great show and a safe show.

“As promoters we’re always selling, selling and publicizing, getting the hospitality ready, getting driver appearances ready, getting entertainment ready and none of that is part of this equation. It’s not the time or place for that right now because that’s not where we are with this situation.

“You have to start with small steps. I think this is a step in the right direction.”

Even without the normal influx of fans, media and team participants to fill the Darlington area’s hotels and restaurants over the next week, Tharp said he has seen and felt the support from the local community as NASCAR prepares to restart its season under extraordinary circumstances.

“This is a very proud community. They’ve supported this race track going on 71 years,” he said. “This state is a very proud state. Once we got word we were going to host these races even without the fans, the folks in this community were very supportive.

“They know the best thing they can do is stay home, watch it on national TV or listen to it on the radio – do that for these three days and then hopefully come back and join us on Labor Day weekend.

“There’s a sense of – I don’t know if pride is the right word – but a sense that this is what South Carolina is about. It’s a state that perseveres and is resilient and that’s how I feel about our sport right now, too.”