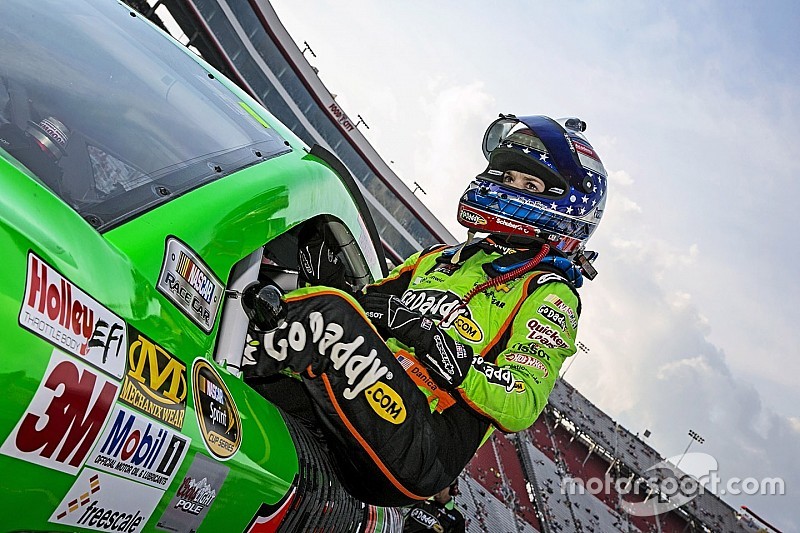 Danica Patrick is putting the band back together for her final NASCAR hurrah in the 2018 Daytona 500.

Not surprisingly, she dialed up her former crew chief, Tony Eury Jr., to call the shots for the No. 7 GoDaddy Chevrolet.

“I keep saying, I couldn’t have written a better story about how this would all fall into place – going with the flow is working out beautifully,” Patrick said. “I’ll be back in GoDaddy green, driving the No. 7 Chevrolet with Tony Jr. in my ear again. It all makes my last NASCAR race just that much sweeter.”

Patrick, 35, will use the charter that previously belonged to Tommy Baldwin Racing and now is controlled by Premium Motorsports. Patrick raced for Baldwin when she ran a limited 10-race season in the Cup series in 2012 while she competed full-time in what is now the NASCAR Xfinity Series.

“It’s great to have everything come together with Danica and GoDaddy for the Daytona 500,” said Baldwin, who is currently head of business development for Premium Motorsports. “The team is working hard to get things ready, and we’re receiving great assistance from RCR (Richard Childress Racing) with engines, engineering support and the pit crew.

"Having Tony Eury Jr. come on board for this race is good as well, since he’s worked with Danica before. That should help give us a leg up on things going into Daytona.”

It was under the direction of Eury at JR Motorsports where Patrick first got up to speed in stock cars. With Eury on the pit box, Patrick achieved a career-best fourth-place Xfinity Series finish at Las Vegas, seven top-10 results and the pole for the 2012 Daytona Xfinity race.

Eury told Motorsport.com he was thrilled to receive Patrick’s call.

“I told her, ‘I guess I got you into this mess, I’ll help you get out,’” Eury said. “I was kind of honored that she asked me to come back and do it. She called about a week-and-a-half ago—two weeks ago. She said, ‘I’m going to go do this Daytona deal. I’d really like to have you do it. I had the most fun when we were racing together. I promise it will be like Key West.’ Remember when I used to call our truck, ‘Key West?’

ECR power under the hood

Eury will work out of Premium Motorsports. He was at the shop on Monday working on the cars he’ll take to Daytona International Speedway in three weeks. The team will use ECR engines.

“We’re also supposed to have engineering support from them,” Eury said. “It’s a Childress clip and a car here. Will Jones hung the body. Jay (Robinson, owner Premium Motorsports) is the primary owner of the car. And Tommy is coordinating who is going to be there.

“We’ll have some good people around. She asked me if I would come in and said, ‘Work your magic.' I told Tommy we’ll all sit down and puts our best plan together and see how it goes.”

Since Eury stepped away from NASCAR, he has developed Fury Race Cars which specializes in NASCAR Modifieds and Late Model tour cars. The last time he worked as a crew chief on a Cup car was 2013 with David Stremme at Swan Racing.

Eury doesn’t expect the dynamic to have changed considerably.

“A lot of the things they’ve been doing to these Cup cars everybody hears about it, and it’s kind of the same thing we’ve been incorporating into the Late Model world,” Eury said. “It’s all in your confidence. If you’re calling a race, and you’re confident in what you want to do and you know what your strategy is going to be and do it, that’s what counts. You just have to be confident in how you call the race.

“I can watch enough footage…but that’s the only thing right now that I can say I ain’t got. How many years can you sit there and say, ‘Ok, last year it went this way and last year it went that way.’ I’ll just go back to film and say, ‘Ok, they pitted here and they pitted there.’ But the racing is going to be so much different down there that I don’t think anybody is going to have a notebook. It’s going to be the ground zero rule—put it on the ground and now, they’re going to impound after qualifying. So everybody is going to have a new deck of cards.”

Although Eury appreciates the opportunity to race with Patrick one last time, he doesn’t believe this race will whet his desire to return to the Monster Energy Cup Series on a full-time basis.

“There’s a friendship here,” Eury said. “I think a lot of her. I think everybody knows that. I hated to see her not racing anymore. But she’s kind of like me, she’s picking a different path in life and so this is just one more time for fun’s sake and we’ll do the best we can.

“Then I’m going back to Fury Racecars. I’m having a blast over there.”

NASCAR plans no changes to breaks in stage racing in 2018