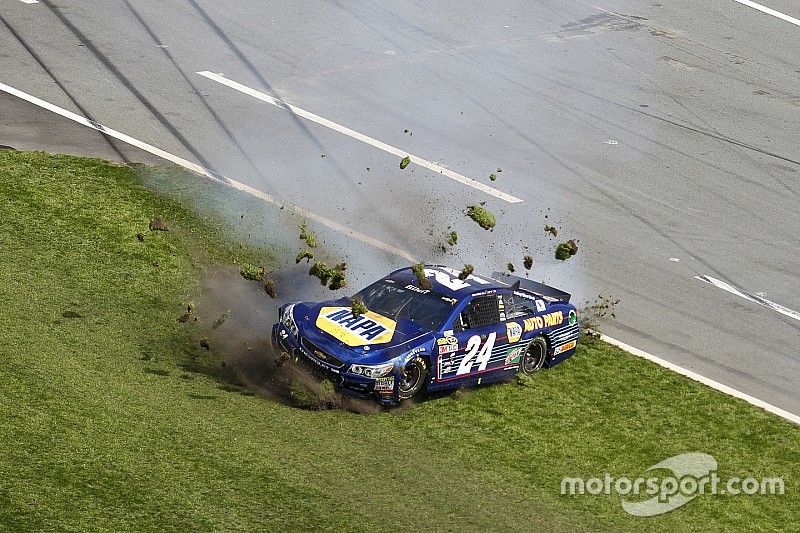 Chase Elliott’s first Daytona 500 began up front but ended up in the garage.

Elliott, who became the youngest pole winner of the Great American Race, appeared to get loose coming off Turn 4 on Lap 19 and cut down in front of Carl Edwards, making slight contact with his car.

Elliott, who won the Xfinity Series season opener on Saturday, then slid on the track for several hundred feet before slamming into the infield grass, which caused significant damage to his No. 24 Chevrolet.

Regan Smith also suffered some damage in the incident, spinning through the tri-oval.

Elliott said he got loose and spun out. “I hate something dumb happened so soon in the race,” he said. “I hate it for my guys.”

Elliott’s No. 24 team was working feverishly in the garage to repair the car enough so Elliott could return to the race and log some laps. He eventually returned to the race 40 laps down.

"Just got in middle there a couple of laps before and got loose off of (turn) four and just lost it," he told TV. "I hate it. It had been such a fun week and you hate to end the race before it even got started. Just disappointed for everybody. We will just have to look past it and get on for Atlanta. That is the most important thing now. Can't get caught up in what happened today, it is irrelevant now. We'll try and get it fixed and make some laps. Then its on to Atlanta and if we can make some laps we will and move forward from here."

Elliott, the son of NASCAR Hall of Famer Bill Elliott, is in his first season replacing Jeff Gordon in the No. 24. Gordon retired at the conclusion of the 2015 season and has moved to the Fox Sports NASCAR broadcast booth.

Elliott finished 37th, but was running at the checkered flag.

Dale Jr. and several others encounter tech issues prior to 500