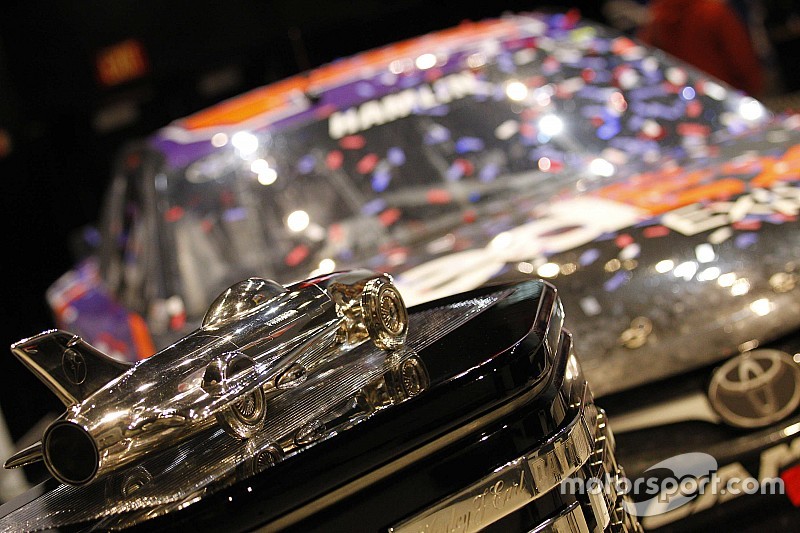 A jubilant David Wilson, TRD president, had no problem putting Denny Hamlin's Daytona 500 victory into perspective. But Toyota's road to DIS Victory Lane was not an easy one, as Jim Utter explains.

In the span of three months, Toyota Racing has captured the two biggest prizes that NASCAR racing has to offer – a Sprint Cup Series championship and a victory in the Daytona 500.

Everything is seemingly going right for the car manufacturer these days as it continues to enjoy the payoff from the immense investment it has made into NASCAR racing over the last several years.

“I cannot articulate adequately what this means to Toyota,” Toyota Racing Development president David Wilson said Sunday after Denny Hamlin’s victory in the 500. “I’ll start by saying it’s our single biggest win in our company’s history.  I’ll put it in front of the Indy 500, which was a pretty special one back in 2003.

I think the first time I cried in this sport was 2010 when Denny came to Homestead with a 15-point lead, and we lost.

“I still remember what resonated my first time here in 2007, this moniker:  the great American race. As we were looking at why we should come into NASCAR, that was a big part of it, to have a shot at winning the ‘Great American Race,’ to be able to talk to the incredible, powerful fan base that NASCAR has.”

Hamlin’s victory in the 500, which has been an elusive one for both the manufacturer and the driver, comes on the heels of the incredible comeback story-turned-championship of Hamlin’s Joe Gibbs Racing teammate, Kyle Busch, just last November.

Busch’s first Cup championship was also the first for a Toyota driver.

And while right now, Toyota seems to be on top of the world, it’s executives know that in the ever-changing world of stock car racing, defeat is just around the corner.

How do they know this? From first-hand experience – a lesson they don’t ever plan to lose sight on.

Bumps in the road

Toyota’s “freshmen class” in the Cup series in 2007 consisted of Michael Waltrip Racing, Red Bull Racing and Bill Davis Racing. None of those organizations still remain in operation today.

In addition, the manufacturer took some hard hits when MWR was involved in two serious cheating scandals – NASCAR detected a fuel additive during pre-qualifying inspection for the 2007 Daytona 500 and driver Martin Truex Jr. was removed from the 2013 Chase when NASCAR determined MWR teams had manipulated the outcome of the race at Richmond, Va., in order to get more of its teams in the Chase.

“We knew it was going to be a long, tough slog. I'll admit that I thought within the first five years we might have a shot at a championship,” Wilson said. “I think the first time I cried in this sport was 2010 when Denny came to Homestead with a 15point lead, and we lost. Had he won, we would have made that five-year target.

“Like in life when you go through trials, you have the emotion and the heartache, when you do achieve a level of success, it truly is sweeter. Perspective truly is a wonderful thing to have.”

That perspective also includes the realization that although everything seems to be going Toyota’s way at the moment, the next stumbling block can be right around the corner – or in this case, right up Interstate 95 from Daytona.

“It certainly helps to come out of the gates like this. But I also realize that in some respects the season really does start in Atlanta. I’m just as anxious right now as I was the week before coming down here because the beauty of this sport is you don't really know how you're going to stack up against your colleagues and your competitors until you run in anger on the race track,” Wilson said.

“We demonstrated that our (restrictor) plate stuff is okay, is pretty good. But we won’t know how we’re going to stack up (for the majority of the season) until we get to Atlanta.”

So, let the celebration begin.

In NASCAR, it could be their last.

Or it could be just the beginning of many, many more.