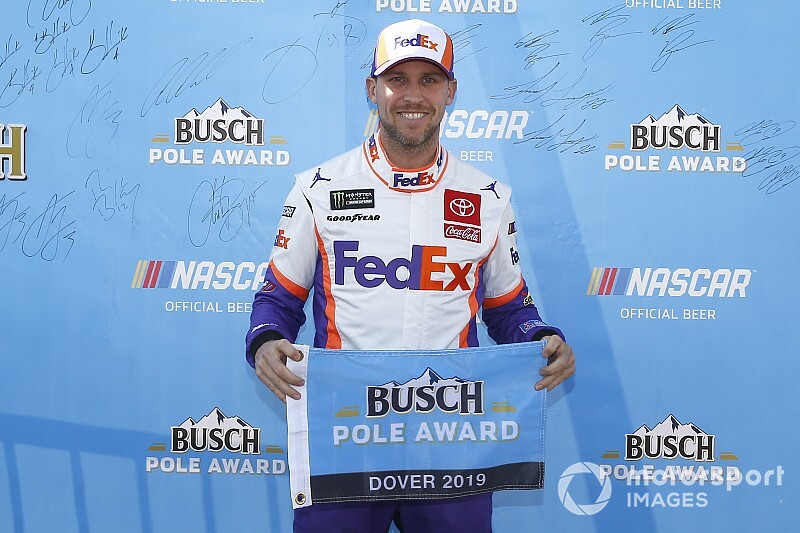 Denny Hamlin will start his 500th NASCAR Cup Series race from the sharp end of the field sunday at Dover (Del.) International Speedway.

Hamlin set the early benchmark in qualifying at 166.984mph and no one seemed to be able to get close to him.

The other JGR playoff driver, Kyle Busch, struggled on his lap and found himself fighting the car to stay on the bottom. He would qualify 18th, the worst of all remaining title contenders.

Kyle Larson seemed to be on a flyer that could unseat Hamlin, but lost it out of the final corner and came up just 0.003 seconds short of pole. For Larson, losing the pole to Hamlin of all drivers made it hurt just a bit more.

"I felt like I ran a good lap ... Three thousandths of a second when you're going that fast isn't much so, wish I was on the pole," he told NBCSN. "I told Denny a few days I was going to get the pole so for him to be a little bit quicker than me is frustrating (laughs).

"Qualifying here is so much fun, especially when it's cooler like this. We're not all the way out of the gas ever, so that was a lot of fun."

Brad Keselowski was the final car on track and took the unique approach of utilizing his first lap as an extension of sorts of his warmup lap, but it did not pay off. He slotted in 16th.

The pole comes in Hamlin's 500th career start and is the 32nd of his career.

"I got 'em!," a smiling Hamlin told NBCSN in reference to Larson. "I'm so happy I beat him. To have that lap there, that was a really good lap for us. I knew it was really solid and about nine tenths quicker than we ran yesterday.

"So proud of this whole FedEx team for giving me a car that obviously was super fast. This is probably as optimistic as I've been going into a Dover race simply because we've really dedicated so much time to working on my technique around this race track and figuring out what I need to do to be succesful and still learning, even at start 500."