Hamlin will start from the pole for Sunday's 500 lapper at Bristol.

Denny Hamlin set a Bristol Motor Speedway track record, then suggested that his Joe Gibbs FedEx Freight Toyota could be even better on Sunday in the Food City 500.

"I'm way more excited about it in race trim than the way we were in qualifying," Hamlin said.

"It's faster than I ever imagined going around this track," said Hamlin, who edged Brad Keselowski by three-thousandths of a second. Keselowski, who won last week's race at Las Vegas, also broke the old track record at Bristol.

Hamlin, who said he expects more track records to fall this season thanks to NASCAR's relaxing of height restrictions and additional downforce on the 2014 cars, finished second in the Daytona 500 and 12th last week at Las Vegas after settling for 19th at Phoenix. 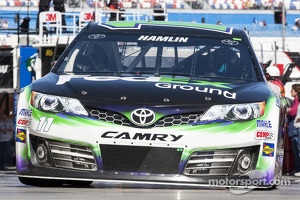 "The intermediate (mile-and-a-half) stuff will come," Hamlin said. "This, obviously, doesn't fix anything from last week. This is a totally different beast.

"(At) short tracks we can make up a little bit here and there with mechanical grip being the biggest factor. But we'll get that other stuff figured out. We had a great debrief on Vegas and that's what it takes -- to continue to communicate."

Hamlin said he'd rather see his team struggle early in the season to work out the kinks than in September or August.

"I'm OK with easing into the year, figuring out where we need to be and finding that in the summer months," he said.

Once again, Team Penske had an exceptional qualifying session, threatening to sweep the front row for the third consecutive week with Keselowski second and Joey Logano fourth.

What's been the secret to Team Penske's fast Fords?

"Black magic," Keselowski joked. "I don't think there's any big secret to it. If you're fast, you're fast."

Tony Stewart, coming off a disappointing 33rd at Las Vegas, failed to edge Stewart-Haas Racing teammate Danica Patrick, who was the 36th and final driver to qualify for Sunday's race on time. Stewart relied on owner's points to make the field, as did Brian Vickers, who has four consecutive top-10 finishes in NASCAR Sprint Cup races at Bristol.

Travis Kvapil, Ryan Truex, Parker Kligerman (with a car repaired after a practice mishap), Joe Nemechek and Timmy Hill also made the field based on owner's points. David Reutimann and Dave Blaney failed to make the cut.

Qualifying went without a hitch. No wrecks, no traffic jams, no apparent problems with cars cooling their engines. Drivers universally praised NASCAR's decision this week to permit cool-down boxes on pit road, eliminating the need for cars to cruise the lower apron of the track at slow speeds in an attempt to cool their engines.

"That rule change has removed danger and replaced it with opportunity," Keselowski said. "Being able to go out there and make multiple runs is a lot more plausible because of that scenario (with additional cooling capability). That rewards the teams and the fans as well."

Asked about the changes, Jeff Gordon, put his hands together as if in prayer and looked toward the heavens. "That's a great move and I think we're all very thankful," he said.

"Great move by NASCAR," said Earnhardt Jr., who was 14th fastest in the first qualifying round, failing to make the 12-car transfer spot in the knockout format. "Just being able to use the cool boxes, guys weren't out there riding around. I think it's still exciting, still a good format and much safer."

"This is way better," said Marcos Ambrose, who qualified fifth. "I don't miss going out there and shutting myself off and having a car blow by me at full speed. I commend NASCAR for stepping up and making changes."

Record qualifying run puts Hamlin back on track at Bristol