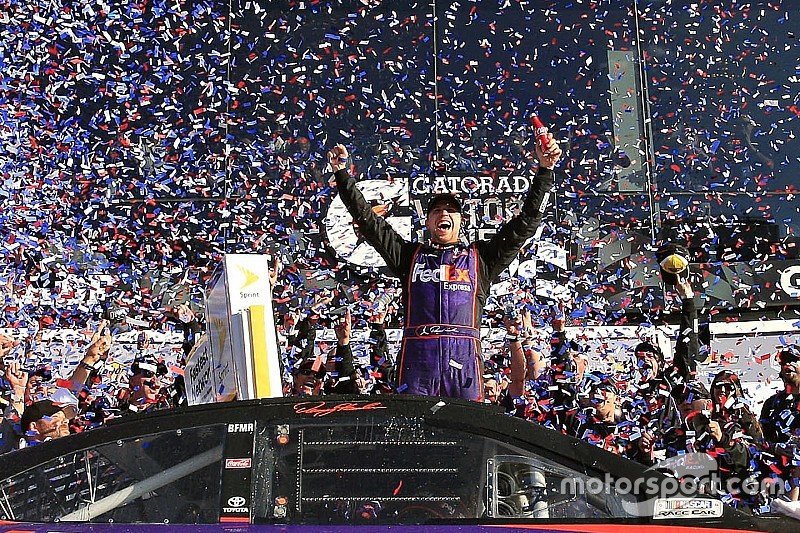 Practice made perfect for the Joe Gibbs Racing Toyotas in the season-opening Daytona 500.

After the JGR teammates — along with technical partner Martin Truex Jr. perfected their drafting prowess in practice all weekend, they put it to good use resulting in Denny Hamlin winning the first Harley J. Earl trophy for the Camry contingent.

“I don’t know what to say,” Hamlin said over the radio.

Matt Kenseth, who started 39th, was leading after the white flag but as the field came into Turn 4, the No. 20 went high to block Hamlin, got loose and lost the lead. Although Kenseth gathered his car back up, Hamlin and Truex battled to the finish with the No. 11 Toyota edging the No. 78 Toyota to the line by 0.010 seconds — the closest finish Daytona 500 history.

Hamlin led the most laps (95) and became the first driver to sweep the Sprint Unlimited and the Daytona 500 since 2000.

The Great American Race was slowed by six cautions. Polesitter Chase Elliott ignited the first yellow-flag period on Lap 20 after losing control of his car off of Turn 4. He collected both Regan Smith and Edwards in the process but both drivers recovered for top-10 results. Turn 4 also proved problematic for Dale Earnhardt Jr., who was coming back through the field on Lap 168 after leading 15 laps. Earnhardt was working the outside lane when he lost control of his car off of Turn 4, finishing 36th.

Greg Biffle attempted to pass Danica Patrick on the backstretch, but when she blocked him the No. 16 Ford made contact with her Chevy sending the No. 10 on a wild ride and setting the race up for 12-lap shoot out.

Kenseth led the field on the restart but once again, his teammates lined up behind on the inside line and stayed in formation until just prior to the white line.

With a push from Harvick, Hamlin had the momentum he needed to challenge Kenseth.

“This was a team victory. My teammates did an amazing job all day — working together. This is a proud moment for everyone at Toyota — in my 11th try in the Daytona.

“I don’t know where that came from. I don’t know how that happened. I can’t even figure out what we did. It all just came together. I got the push I needed from the 4. But this wouldn't be possible if the Toyotas hadn’t stuck together all race long.

“I’m so proud to get this win for Joe Gibbs Racing.”

For Hamlin, Sunday’s victory at Daytona International Speedway was his 27th career Sprint Cup win in 363 career starts. With the win, he qualifies for the Chase for the Sprint Cup championship and leads Truex by five points in the standings.

The win is also the first for Hamlin’s new crew chief Mike Wheeler.