Trevor Bayne and the Motorcraft/Quick Lane crew had the No. 21 Ford Fusion running strong in practice at Indianapolis Motor Speedway, but when it came time to qualify for the Samuel Deeds 400 at the Brickyard, they experienced a minor hiccup.

“The car was super tight in qualifying trim,” Bayne said. “We were on the splitter really hard which makes it even tighter.”

Overall, Bayne and the Motorcraft/Quick Lane crew were pleased with their pre-race efforts. They were 15th fastest in the opening practice session on Friday, with a best lap at 181.459 mph. In Saturday morning’s second session, they improved to 184.057. 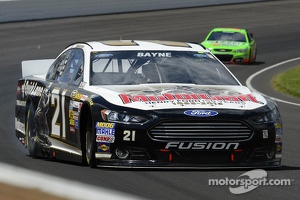 When it came time to prepare the No. 21 Ford Fusion for qualifying, the crew made some adjustments to allow for a tight handling condition, but they were careful to not go too far and put Bayne in the position of trying to qualify his way into the race with a car that was too loose.

“If you free the car up too much here at Indy, you just can’t drive it,” team co-owner Eddie Wood said, pointing out that even a minor slip on the qualifying run would have likely meant missing the race. “The important thing is that we made the race. That was important, especially since our car was chosen to commemorate Henry Ford’s 150th birthday.”

Bayne also was glad to have qualifying in his rear-view mirror.

“I’m glad to go back to race trim where our car was good,” he said. “It is hard to pass here, so qualifying is important.

“I think we can still make it up and go to the front…. We are in the show, and that is what we came here to do.”

“It is cool to represent Henry Ford, the Ford Oval, Motorcraft/Quick Lane and the Ford family,” he said. “Wood Brothers Racing has also been a huge part of Ford Racing’s history."

“It is an awesome partnership, and we are glad to be celebrating Henry Ford’s 150th birthday.”